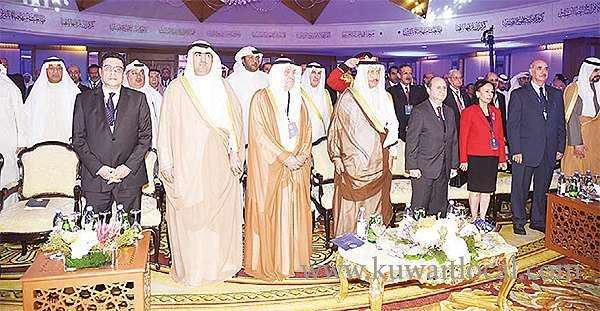 Kuwaiti Minister of Commerce and Industry Khaled Al-Roudhan and his Egyptian counterpart Amr Nassar agreed Wednesday on the importance of economic integration between their respective nations. This joint statement came during the one-day Kuwaiti-Egyptian cooperation forum held under the slogan “Brothers, Partners”. The event is held under the auspices and with attendance of His Highness the Prime Minister Sheikh Jaber Al-Mubarak Al-Hamad Al-Sabah. During a session titled (Strategic Partnership … Promising Reality and Hopeful Future), both ministers stressed that both countries were seeking to bolster cooperation to achieve the aspiration and dreams of people in Kuwait and Egypt. Minister Al-Roudhan, on his part, said that increasing commercial exchange between the two countries must go through active and real participation by the private sector.

Reforms
Kuwait took various steps to implement economic reforms in an effort to attract foreign investments and most likely investments from the fellow Arab countries especially Egypt, said the minister who revealed that there were roughly 1,144 Kuwaiti companies operating in Egypt. Providing similar input, Egyptian Minister Nassar said that ties between Egypt and Kuwait were “historic”, affirming that people from both nations were eager to achieve economic integration.

The forum today focuses on achieving such goals, which will be beneficial for both Kuwait and Egypt, said Minister Nassar who affirmed that his country embarked on a number of economic reforms in the past two years to attract Arab and foreign investments. He called on Kuwaiti investors to seek business opportunities in Egypt, stressing that his country has much to offer.

Meanwhile, Kuwait Direct Investment Promotion Authority’s (KDIPA) Director General Sheikh Dr Meshaal Jaber Al-Ahmad Al-Sabah said that his country is keen on attracting lucrative investments that would benefit both consumers and producers. He noted that Kuwait was embarking on a quest to diversify its income shifting from an oil-based economy to multifaceted one able to compete and benefit itself and others.