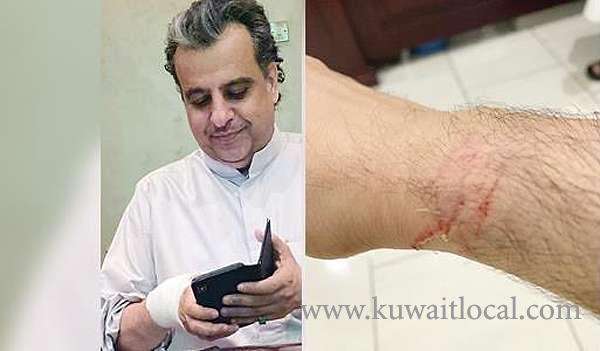 The Secretary-General of the Arab Media Forum and writer Madhi Al-Khamis has been a subject of misunderstanding, humiliation and verbal and physical abuse and suffered at the hands of two securitymen, an incident that has reached the doorsteps of senior officials in the Ministry of Interior, reports Al-Rai daily.

The victim, Madhi Al-Khamis, described the incident saying after he returned home, he parked his vehicle in the parking lot of his home. At one point someone rang the door bell and when he answered the door, he saw two men.

The men said someone had blocked their car and sought his help. When he went to help them, he got the shock of his life when the duo without introducing themselves asked his name. The two securitymen then asked him to go with them and without even giving the reason, he was handcuffed, assaulted and d u m p e d in the back of their four wheell drive.

A l – Kha mis introduced himself , and told the men his name and his designation and also told them he is suffering from diabetes and hypertension, but every time he pleaded he was to “Shut up or we will break your teeth and cut your tongue.”

At first, Al-Khamis believed he was a victim of kidnapping but later realized he was wrong when he was taken to the Al- Yarmouk Police Station where he was detained in a room for one day, following which he only received an apology and was told ‘it was a mistake and that he is not the wanted person’.

Al-Khamis then went to a hospital and got a medical report for his injuries and the doctor recommended that he should check with an orthopedist. Deputy Prime Minister and Minister of Interior Sheikh Khalid Al-Jarrah is said to have been quick in his response to the incident and has instructed the Interior Ministry Undersecretary Lieutenant General Essam Al-Naham to form an investigation committee and punish those responsible for Officer summoned: The Criminal the ‘mistake’.