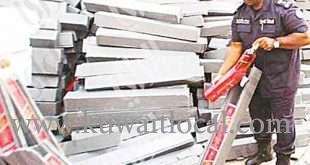 Autho-rities in Kuwait have foiled an attempt to smuggle around 4,000 bottles of alcohol  into the country. The bottles were concealed in a container of construction material that was being transported on a truck, the head of Al Ahmadi security department said according to gulfnews.com.

“A patrol was driving in the Industrial Zone when the servicemen spotted a parked truck,” Abdullah Safah said. “When the policemen approached it, they did not find the driver, but they saw a whiskey bottle.

They immediately called a back-up. The container was subsequently opened and the policemen found 500 boxes of whiskey hidden in the middle of construction material.”

The competent authorities were informed and the truck was confiscated while an investigation was launched to identify the culprits, summon the truck owners and determine how the bottles were smuggled past customs officers, he added, Kuwaiti daily Al Rai reported on Thursday.

“Dealers trading in drugs and whiskey tend to exploit national and festive occasions to push their poison among young people and addicts, hoping they would not be caught by the police. Officers are fully aware of their tactics and will do their best to foil their illicit and ominous deals,” he said.

Kuwait, alongside all Islamic countries, will celebrate Eid Al Adha, the Feast of Sacrifice, on Sept 1.

The purchase and making of alcoholic beverages are strictly prohibited in Kuwait.

In July 2014, the authorities seized 6,000 bottles of wine being smuggled into the country.

The smugglers had reportedly hidden the bottles inside a container that was shipped to Kuwait through Shuaibiya port.