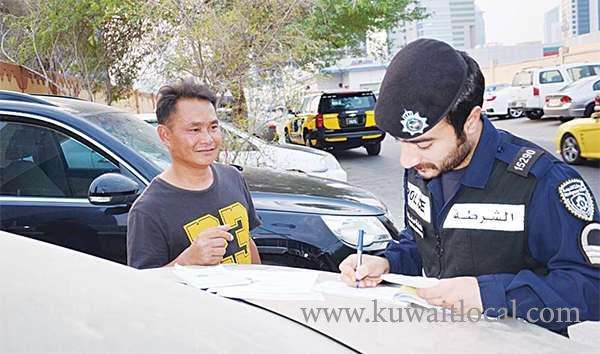 Officers from General Department of Rescue Police launched security campaigns in several areas throughout the country during which they arrested 136 wanted individuals and violators of law, seized five vehicles, issued 345 traffic citations and registered 14 violations.

The campaigns were carried out under the supervision of the Assistant Undersecretary for Operation Affairs at Ministry of Interior Major General Jamal Al-Sayegh and in the presence of many security leaders. According to a press release issued by Ministry of Interior, a total of 1,471 wanted individuals and violators of law were arrested and about 7,851 citations were issued against various violations in the month of August.

Public Relations and Security Media Department affirmed that such security campaigns will continue based on a well-studied plan with the aim of reducing the number of violations. Regarding the security campaigns held on Wednesday, Aug 31, the department explained that the campaigns were launched at 4pm and continued for two hours.

Rescue police teams were allocated at security checkpoints and distributed at various entry and exit roads of the area.

The legal documents of the pedestrians and motorists were checked. The officers arrested 136 wanted individuals and violators of law. Among them, 24 were involved in civil cases, 31 were reported as absconding, 45 did not have their personal identification documents, 23 were holding expired residencies, three were wanted by law for drug-related cases, two were in a disoriented state, five were wanted by the General Department for Residency Affairs, one was involved in a case of fraud, one was sentenced to six-month imprisonment and another to three month-imprisonment.

They were referred to the concerned authorities for necessary legal action. The Public Relations and Security Media Department stressed that the aim of these campaigns is to control the security situation of the country by arresting violators of the country’s laws and the traffic regulations, as well as to reduce the crime rate in the country.

It urged Kuwaiti citizens and expatriates to ensure they always carry their official identification documents in order to avoid being arrested. The Public Relations and Security Media Department revealed that about 1,471 wanted individuals and violators of law were arrested and about 7,851 citations were issued in the month of August.

The arrested individuals included 102 individuals involved in drug-related cases, 27 who were in a disoriented state, 18 for possessing alcohol, four involved in theft cases, 44 involved in criminal cases, 394 involved in civil cases, 66 against whom arrest orders were issued, 590 who were reported as absconding and 226 for holding expired residencies. In addition, 21 vehicles that are wanted by law and 32 violating vehicle were seized, and 2,031 direct traffic citations were issued during the security campaigns held throughout the month of August.

The Airport Continues Its Commercial Flights According to Alqabas Kuwait International Airport continued to operate commercial flights for the fifth consecutive day, as 14 flights arrived in the country yesterday, while 16 flights departed. A re... August 06, 2020 0 7694 Category: Travel

19 Dead and 127 Injured after Air India flight crashlands in Kozhikode, breaks into two 19 passengers died and 127 were injured, including 15 seriously, when a plane coming from Dubai met with an accident at Karipur airport in Kozhikode, Malappuram Superintendent of Police (SP) said on F... August 07, 2020 0 6059 Category: India

3 Stage Plan For Return of Expats - MOI High sources revealed Alqabas  that the return of residents to the country will take place according to 3 successive stages, during which priority will be according to the needs of the state, wit... August 07, 2020 1 4311 Category: Expats

Allow Entry To Non-Kuwaitis From The 31 Banned Countries Who Are Related To A Kuwaiti The General Administration of Civil Aviation issued a circular to airlines operating at Kuwait International Airport allowing non-Kuwaiti passengers who have a relationship with a first-class Kuwaiti ... August 09, 2020 0 3998 Category: Travel

Ministry Of Health Prepared The List Of Expats Who Are Struck Outside The Country Health Ministry is developing a inventory  of its employees, who are stuck outside the country and  are unable to return to Kuwait thanks to restrictions imposed  due to coronavirus pan... August 06, 2020 1 3028 Category: Kuwait

Kuwait – India Agrees To Evacuate 1,000 Indians Per Day Back To India The Indian Government is about to start flights to bring back Indian expats who are willing to come back to India from Kuwait. Regarding this Indian authority had a discussion with the Kuwait counterp... August 06, 2020 0 2911 Category: Travel

Deportation of More than 350,000 expats in short term The government developed a plan to address the demographic issues, consisting of many items, which were disclosed in a report prepared by a group of government agencies headed by the Ministry of Affai... August 09, 2020 0 2528 Category: Expats

Salary Of Traveling Teachers Does Not End Until The Airport Opens At a time when responsible educational sources revealed instructions for school directors to ensure that the salary of traveling teachers who were unable to return because of the suspension of air tra... August 07, 2020 0 2449 Category: Education
Popular Offers