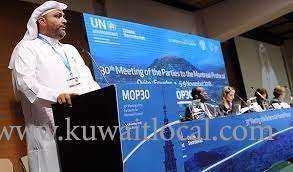 Head of the Ozone division and National Ozone officers at Kuwait’s Environmental Authority, (Eng.) Yaqoub Al-Matouq affirmed that the Montreal Protocol which protects the stratospheric ozone layer with 197 member states, is one of the most successful agreements in the field. In a statement to KUNA on Saturday, Al-Matouq said that as Kuwait’s representative, he headed the 30th Meeting of the Parties (MOP 30) to the Montreal Protocol which was held in Quito, Ecuador.

He expressed deep satisfaction towards member states’ efforts in successfully halting depletion of the ozone layer, announcements of gradual recovery and a full recovery by 2060.

Al-Matouq added that Ecuadorian President Lenin Moreno opened the meeting which was scheduled for the 5-9 of November, with presence of a number of Ministers and Officials from more than 150 countries.

The participating nations discussed many important environment issues, especially those linked to protecting the ozone layer and the involvement of the members in this issue along with contributions of some cooling modes from new technologies on the phenomenon of global warming, Al-Matouq added.

The participants shed light on opportunities to improve energy efficiency in alternative technologies in reducing hydrofluorocarbons (HFC), which affects energy consumption due to excessive use of Air Conditioning devices especially in those hot environments of which Kuwait is amongst.

The member also discussed “with great concern and attention” the unexpected emissions of Methane Chloride Gas (CFC-11) after worldwide nations in January of 2010 announced halting the production and trade of this gas, significantly benefiting the ozone layer.

Another important topic on the meeting’s agenda is available technologies that eliminate gases of controlled substances from refrigerants resulting from out-of-service air conditioners.

Al-Matouq mentioned the meeting also discussed issued linked to controlled substances from refrigerants based on requirements and amendments of the Montreal Protocol, which do not affect the stock required for different maintenance sectors. A decision was issued to end any increase in production of the Methane Chloride Gas (CFC-11) and the necessity and implementation of it by all 197 member states.

The meeting resulted with many positive outcomes over the topics discussed of which is the modifying the protocol and reports on the delivery of HFC compliance data. During his meeting, Al-Matouq pointed out the challenges faced by the GCC countries specifically the rapid A/C technology changes, an issue that demands energy-efficient technologies with lower energy consumption taking into consideration urban expansion and population growth in Kuwait.