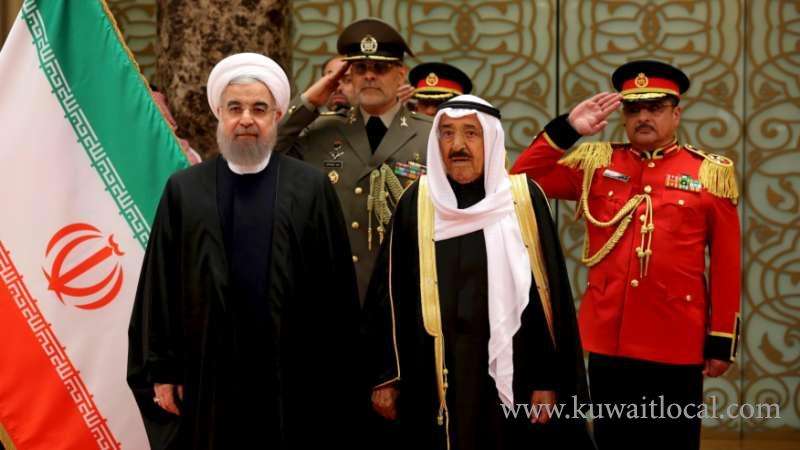 Kuwait said on Thursday it is shutting the Iranian cultural mission and calling for a reduction in the number of Iranian diplomats stationed in the country, deepening a rift between the Gulf Arab states and Tehran.

The official Kuwait News Agency announced the move in a brief statement, linking the decision to the case of a terror cell broken up in 2015 that authorities allege had contacts with Iran and the Lebanese Shiite militant group Hezbollah.

The Iranian ambassador to Kuwait has been notified of the decision, the news agency, known as KUNA, reported.

Embassy staff did not immediately respond to requests for comment.

Iran’s state-run IRNA news agency reported that the country’s foreign ministry summoned the Kuwaiti chargé d’affaires in Tehran to explain the move. The ministry is protesting the call to cut the number of diplomats stationed in Kuwait, IRNA said.

Later, the ministry’s website, mfa.ir, reported that the spokesman, Bahram Ghasemi, rejected all accusations against Iran and said that Tehran will take counteraction.

The 2015 case centers on a group of 26 people known as the al-Abdali cell whose arrests for links to Shiite powerhouse Iran touched on sensitive sectarian issues in Kuwait, a Sunni-majority country.

Besides having “furtive contacts” with Hezbollah and Iran, its members were accused of weapons possession and of planning “hostile actions” inside Kuwait, a tiny U.S.-allied Arab state wedged alongside the Arabian Gulf between Saudi Arabia and Iraq.

Members of the cell have been tried and received sentences ranging from a few years in prison to, in one case, the death penalty. That sentence was later reduced on appeal to life imprisonment.

A Kuwaiti Supreme Court ruling last month convicted 21 people of belonging to a cell that had been formed and trained by Iran’s Revolutionary Guards.

A senior government official, speaking on condition of anonymity, told AFP around 15 Iranian diplomats were expelled.

He declined to comment on whether the Iranian ambassador was among those ordered to leave.

Kuwait also ordered the closure of the Iranian “military, cultural and trade” missions, the official said.

Kuwait’s Supreme Court last month sentenced the mastermind of the cell to life in jail and condemned 20 others to various prison terms for alleged links with Iran and Lebanese Shiite militia Hezbollah, and plotting terror attacks in Kuwait.

“Following the supreme court ruling on the case … the government of Kuwait has decided to take measures, in accordance with diplomatic norms and the Vienna Convention, towards its relations with the Islamic Republic of Iran,” he told AFP.

Saudi Arabia on Thursday expressed “full support” of the measures adopted by Kuwaiti authorities regarding the Iranian diplomatic mission in Kuwait.

The announcement was made by a senior Saudi Foreign Ministry source, according to the state-run Saudi Press Agency (SPA).

It comes after Kuwait reduced the size of the Iranian mission following a court decision revealing that a terror cell, dubbed Al-Abdali, had links to and received support from Iranian bodies.

Kuwait has not imposed sanctions on Qatar and has positioned itself as a neutral party in the crisis.

Kuwaiti authorities busted what they said was a “terrorism” cell with ties to Iran in August 2015 and seized large quantities of arms, ammunition and explosives.

Cell members were convicted of working for Iran’s Revolutionary Guards and Lebanon’s Hezbollah. They were also convicted of smuggling explosives from Iran.

The only Iranian member of the cell was sentenced to death in absentia by the lower court early last year.

Kuwait’s interior ministry on Tuesday said 14 convicts were on the run while the newspaper, Al-Seyassah, has said they had fled to Iran by sea.

The cell was convicted by a lower court early last year but acquitted on appeals several months later and set free.

The supreme court, whose rulings are final, overturned their acquittal on June 18 and sentenced them to between five and 15 years in prison.

In March 2011, a Kuwaiti court condemned four people of forming a spy cell for Iran. That led to the expulsion of ambassadors by the two countries but they returned a few months later.

Unlike most of its fellow GCC partners, Kuwait has maintained good relations with Iran in recent years.

In February, Iranian President Hassan Rouhani visited Kuwait City a month after the emirate launched a dialogue with Iran in a bid to normalise Gulf-Iran relations.

Around a third of Kuwait’s native population of 1.35 million is Shiite.

Iran threatened to reciprocate Kuwait’s decision to expel most of its diplomats on Thursday, saying the accusations that Tehran was behind a terrorist cell in the country were “baseless”.

“Iran’s strong objection has been communicated to Kuwait’s charge d’affaires. It was reiterated that Iran reserves the right to a reciprocal measure,” said foreign ministry spokesman Bahram Ghasemi in a statement on his Telegram channel.

A senior Kuwaiti official had earlier told AFP that 15 Iranian diplomats had been asked to leave the country.

The move follows a court case in which 21 people were found guilty of belonging to a cell that had been formed and trained by Iran’s Revolutionary Guards, which Tehran has denied.

“It is regrettable that Kuwaiti officials, in this sensitive situation in the region, instead of making an effort to reduce useless tensions … have targeted the Islamic republic with baseless accusations,” an Iranian foreign ministry official told the Kuwaiti charge d’affaires during their meeting, according to Ghasemi.

It has not been confirmed whether Iran’s ambassador Alireza Enayati is among those being expelled.

Most convicts in Kuwait

Ninety percent of the convicts involved in the ‘terror’ cell known as ‘Al-Abdali’ are still holed inside the country, reports A-Rai daily quoting a high-level security source, reports Al-Rai daily.

The same source stressed the vigilant security authorities have identified the hideouts of some of the men and that their arrest is only a matter of time.

Meanwhile, the Al-Qabas daily quoting a reliable source said one of the convicts was spotted three days ago at a telecommunications outlet while paying his bill.

Security authorities are also said to have traced three calls made from cellphones near the Bubiyan Island.