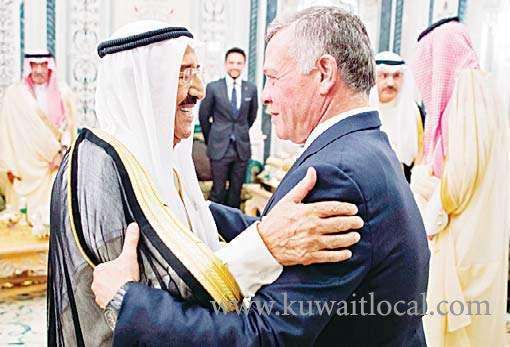 Saudi Arabia, Kuwait and the United Arab Emirates pledged $2.5 billion of aid to Jordan on Monday, a joint statement from the Gulf states said, following austerity measures that have sparked massive protests in the country.

Price hikes and subsidy cuts pushed thousands of Jordanians to the streets last week against the government’s economic policies. The rare, peaceful protests prompted King Abdullah to sack the government and appoint a new prime minister, whose first pledge was to shelve steep tax hikes.

The three wealthy Gulf states said Jordan would receive as much as $2.5 billion of aid to help it weather the economic and political crisis. The package includes a deposit in Jordan’s central bank, guarantees to the World Bank, annual budget support for five years, and development projects, the statement carried by the Saudi state news agency, SPA, added.

Jordan’s newly designated prime minister, Omar al- Razzaz, said on Thursday he would drop a proposed income tax bill, conceding to a key demand of protesters who had already brought down the previous government. Jordan’s biggest protests in years began eight days ago over tax increases and subsidy cuts pushed by the International Monetary Fund to reduce the country’s big public debt.

Cash-strapped Jordan, a close US ally that relies heavily on donors, is struggling to curb its debt after securing a $723-million loan from the International Monetary Fund in 2016. Austerity measures tied to the IMF loan have seen prices of basic necessities rise across the kingdom — culminating in a week of angry protests over tax proposals that forced prime minister Hani Mulki to resign.

The Gulf aid package appears driven by the desire to avoid a repeat of the 2011 Arab Spring uprisings, which saw pent-up public anger spilling onto the street across the Middle East, analysts say. “The speed and the gravity with which the Gulf states are responding is a very clear testament to their concern and determination to nip this unrest in Jordan in the bud,” Lori Boghardt, a senior fellow at the Washington Institute for Near East Policy, told AFP. “They are going to do all they can to thwart another Arab spring on their doorstep.” Gulf states, except for Bahrain, largely avoided the pro-democracy protests unleashed by the Arab Spring, but they have sought to deepen economic links in the region following an oil price slump in 2014.

Jordan blames its economic woes on instability rocking the region and the burden of hosting hundreds of thousands of refugees from war-torn Syria, complaining it has not received enough international support. The World Bank says Jordan has “weak growth prospects” this year, while 18.5 percent of the working age population is unemployed. Jordan’s Gulf allies have pledged $2.5 billion in aid to help Amman ease an economic crisis that sparked angry protests, but analysts warned there is no “miracle cure” for its woes.

The lifeline announced Sunday at the end of a Saudi-hosted summit reflects fears in the Gulf that the protests that shook Jordan could spread to their doorsteps, experts said. “What happened in Jordan was unprecedented and brought to mind the Arab Spring, which is a cause of concern for Gulf countries,” said analyst Oraib Al Rintawi, who runs the Al- Quds Centre for Political Studies.

The 2011 uprisings saw pent-up public anger spill onto the streets of many Arab capitals, leading to the ouster of several veteran leaders. But Jordan, a key US and Gulf ally, was largely spared. “Jordan’s stability is very important for the security of the Gulf region and particularly Saudi Arabia which is afraid that the protests would spread to its doorstep,” Rintawi told AFP. Rintawi said Saudi “concerns” that Jordan could look outside the Gulf and its traditional allies for help were evident in the speed with which the summit was organised. “Saudi Arabia feared Jordan could seek undesirable options,” he said. In May, Jordan’s King Abdullah II was seen shaking hands with Saudi Arabia’s arch-rival, Iranian President Hassan Rouhani, during a summit of the Organisation of the Islamic Cooperation in Istanbul.

There have also been recent signs of a warming of ties between Jordan and Qatar, the target of a boycott by a Saudi-led bloc that broke ties a year ago over claims Doha supports terrorism and Iran. Amman also has vocally opposed the decision by US President Donald Trump to recognise Jerusalem as the capital of Israel and the transfer of the American embassy to the disputed city from Tel Aviv.

Jordan, which administered east Jerusalem until Israel took control of it in the 1967 Six-Day war and later annexed it, backs the position of the Palestinians who see the area as the capital of their future state. Rintawi said Washington gave its Gulf allies a “greenlight” to help Jordan because it considers the tiny desert kingdom which shares borders with Syria and Iraq to be a “strategic partner”.

“As often is the case Jordan is stuck between a rock and a hard place,” said Karim Bitar, director of research at the Paris-based Institute of International and Strategic Affairs. Jordan blames its economic woes on instability rocking the region and the burden of hosting hundreds of thousands of refugees from war-torn Syria, in addition to providing haven to Iraqi and Palestinian refugees. Rintawi said there is no “miracle cure” for Jordan and stressed that the country needs “a new social contract”. “The economy cannot remain hostage to international aid … the Jordanians must learn to rely on themselves, and set up new economic measures to combat corruption and reduce public spending,” he said.

Jordan’s Prime Minister said on Monday that his country is grateful for the aid a trio of Gulf nations have announced in a meeting a day earlier to address the economic crisis in the Hashemite Kindgom. “We thank our Arab brothers for never failing to stand by Jordan, as evident by today’s meeting,” Omar Al-Razzaz said in a statement. The Jordanian Prime Minister was referring to Sunday’s encounter in the holy city of Makkah involving Saudi King Salman bin Abdulaziz, Jordanian King Abdullah II, His Highness the Amir of Kuwait Sheikh Sabah Al- Ahmad Al-Jaber Al-Sabah and UAE Vice-President and Prime Minister as well as Ruler of Dubai Sheikh Mohammed bin Rashid Al-Maktoum.