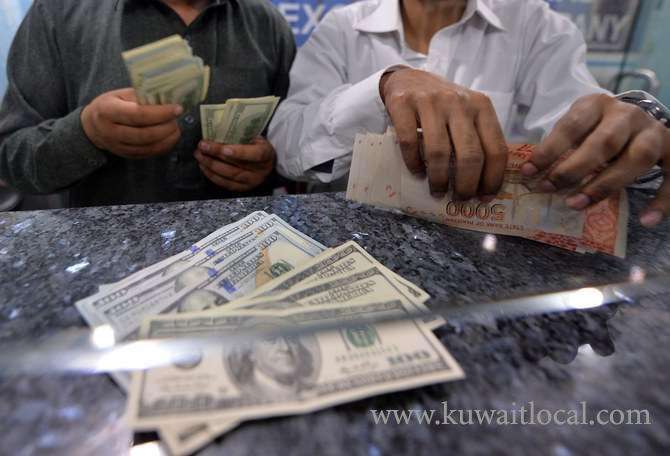 The Pakistani currency on Wednesday hit an all-time low of 146.25 rupees against the US dollar amid looming fears of further devaluation, just days after Pakistan signed a bailout deal with the International Monetary Fund.
The $6 billion bailout package comes with strict reform conditions, including measures to maintain a free-floating exchange rate.
After reaching the record low, the rupee closed at 144 against the dollar at the end of the trading day.
Malik Bostan, president of the Forex Association of Pakistan, said he met with Prime Minister Imran Khan on Wednesday, who assured him that the IMF had not demanded further devaluation of the rupee.

“The IMF has only demanded an exchange rate based on demand and supply,” Bostan told Arab News.
“After the meeting with PM, dollar rates have started cooling down and will further stabilize. We have requested the government to impose a ban on rumors regarding the rupee that are hurting market sentiments. Predictions about the dollar (in) the media should be stopped.”

Bostan said that Khan had consented to setting up a committee comprising officials from the State Bank of Pakistan, exchange companies and the Finance Ministry to resolve the issues faced by exchange companies.
“We have informed him we can increase inflow of greenback from $5-6 billion to $7-8 billion provided agreements are facilitated with around 500 international companies operating in Pakistan,” Bostan said, adding that the PM had agreed to devise a mechanism to discourage the outflow of dollars from Pakistan by encouraging investment in the country.

The International Monetary Fund and Pakistan reached a “staff level agreement” on Sunday for a $6 billion bailout package following months of negotiations on a deal that aims to bolster Pakistan’s flagging economy and perilously low foreign exchange reserves.
Talks with the IMF began soon after Khan’s government was appointed last August but a package has been held up by differences over the pace and scale of reforms that Pakistan would be required to undertake.

The IMF has pressed Pakistan to improve tax revenue collection, bolster foreign currency reserves and narrow a current account deficit expected to top 5 percent of gross domestic product this year. The Fund has also pushed Pakistan to embrace a flexible rupee policy. Pakistani officials fear these steps will further hurt economic growth, cause of spike in the key interest rate and push the Pakistani rupee further down.

“A market-determined exchange rate will help the functioning of the financial sector and contribute to a better resource allocation in the economy,” the IMF said in a statement issued after the agreement“

The rumors of further devaluation of (the) rupee against dollar have squeezed the supply of the dollar and increased demand,” said Zafar Paracha, general secretary of the Exchange Companies Association of Pakistan. “Those holding dollars are not willing to sell, anticipating gains on devaluation.”