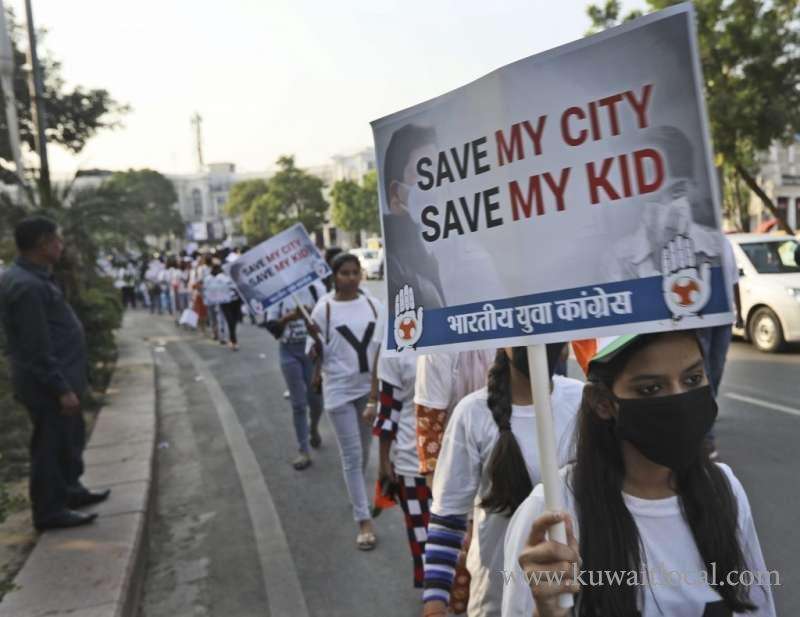 Indian farmers said they're being unfairly criticized for causing the worst air pollution in the capital because of the burning of stubbles in fields.

The air quality index stood at 273 on Thursday after authorities declared a health emergency last weekend when the index crossed 500 — 10 times the level considered healthy by WHO standards.

Despite a ban on stubble burning, farmers say they have no choice but to set fire to the crop residue.

Farmers in Haryana and Punjab states, bordering New Delhi, traditionally resort to stubble burning during the months of October and November as a cheap way of clearing their fields after harvesting the crops. This year's record pollution has also been aggravated by smog from festival fireworks.

In an effort to tackle the high pollution levels, the New Delhi government is experimenting at limiting the number of cars on the road and halting construction activity. New Delhi's top elected official, Chief Minister Arvind Kejriwal, said his government had played its part and blamed farmers for setting the fires.

"We are helpless," said Balwinder Singh Chabba, a farmer in northern Punjab state.

He said he cannot afford any delay in getting his fields clear of stubble from the previous crop before sowing the next one.

The farmers, reluctant to stop stubble burning, also criticized the government for blaming them.

"Why doesn't Delhi's air quality improve during other 11 months where when there is no stubble burning," said Gurbhajan Singh, as plumes of acrid smoke rose up from fields.

Punjab on Tuesday reported the season's highest farm fire count at 6,668, as farmers continued to defy the ban, the Press Trust of India news agency reported.

The Punjab government offers subsidies for farm equipment to dispose of the crop residue but farmers say the pricy machines have remained out of reach for most.

"The government should either give us a bonus of $2.8 per quintal of our produce or provide us $84.5 per acre so that we can clear our residue without burning it," said Singh.

The state and central governments, often led by rival political parties, have continued to blame each other for the pollution crisis.

"There is passing of the buck," India's Supreme Court observed Monday, calling out both the central and state authorities.

"People are dying and it can't happen in a civilized country," the court said.