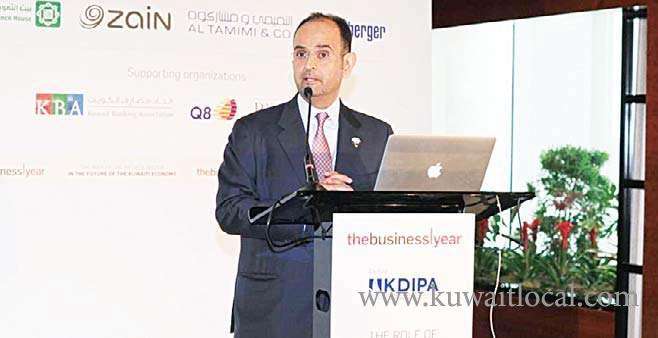 “Kuwaiti creative young people represent the genuine future wealth for promoting the national economy,” he said, echoing the State’s commitment to creating the congenial atmosphere for developing economic and infrastructure projects, including financial infrastructure that helps in drawing investments and diversifying national income sources. Al-Hajraf stressed the significant and pivotal role played by the Kuwaiti private sector throughout history in bolstering the national economy, voicing unwavering belief in the private sector’s ability to lead the economic system to put Kuwait’s fresh development drive in place.

The Kuwaiti minister welcomed economic partnerships between Kuwaiti and British companies, which undoubtedly reflect the nature of distinguished economic relations between both countries.

In this context, Al-Hajraf said this year’s conference coincides with both sides marking 120 years since historical relations were forged. On his part, Director- General of Kuwait Direct Investment Promotion Authority (KDIPA) Sheikh Meshaal Jaber Al- Ahmad Al-Sabah made a presentation on Kuwait’s advantages and potentials, primarily legislative and legal atmosphere and available investment opportunities that are meant to achieve economic diversification and promote the private sector’s role.

He said Kuwait boasts great potentials to be a significant destination for attracting investments in the region, pointing to progress in the field of developing and streamlining investment-bearing legislation and procedures.

Speaking to KUNA on the sidelines of the conference, Sheikh Meshaal said the holding of the conference in London comes within the framework of achieving Kuwait’s 2035 development plan, and of promoting Kuwait’s advantages. He noted that the aim of these conferences in major capitals is to attract direct added-value investments which provide jobs to Kuwaiti young people.