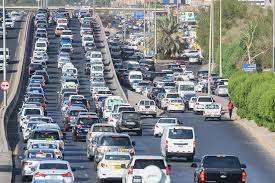 In spite of the fact that mass transportation has been promoted as a strong and effective solution to traffic jams and congestion in Kuwait, it is a culture that is absent in Kuwaiti society. Despite studies and research demonstrating that it contributed to a 50% reduction in congestion in the United States.

It has been stated that the experience of mass transportation has contributed to the solution of traffic jams in many countries, according to retired Brigadier Bader Saleh Al-Hammadi, Vice President of the Kuwait Society for Traffic Safety. He also mentioned that the high temperature and humidity in Kuwait reduce the demand for this type of transportation

According to Al Hammadi, the problem of traffic affects everyone who uses the street, and mass transit can contribute to resolving it. There is, however, a problem with using this type of transport since a large segment of the population is opposed to it. The summer period, which extends for more than five months, is interspersed with intense heat, humidity, and dust. This makes people wonder about the issue of waiting for the bus in harsh weather conditions.

Further, he said, “In countries that use the mass transportation system, people are used to this from their early educational stages, so we find that they are faced with a simple cost method that saves them from huge sums that are paid to own a private car,” noting that “the system of electric trains that are used in mass transportation.”

Dr. Jamal Al-Mutawa, a member of the Kuwait Society for Traffic Safety Board, said that, in order to reduce traffic congestion, several solutions are offered across the country, including changing the working hours of government institutions and schools, activating e-government, imposing road taxes, reviewing fuel and insurance prices, and allocating special lanes for vehicles carrying more than one person.

For mass transit to become effective in Kuwait, it must be timely, safe, and quick to reach all the necessary destinations, convenient for passengers, and charge minimal fees, Al-Mutawa said.

According to Al-Mutawa, the absence of a culture of mass transportation is due to the ease with which a driver's license can be obtained, which encourages people to use private vehicles rather than mass transit. Obtaining inexpensive vehicles that may not meet safety and durability requirements may be easy, as is paying symbolic fees for insuring the vehicle regardless of its type and symbolic fuel prices.