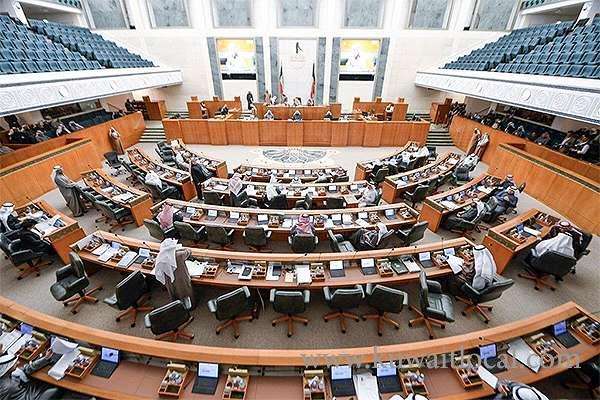 The National Assembly on Tuesday approved the proposal to amend the Social Security Law, also known as ‘Early Retirement Bill,’ in its first reading with 40 votes in favor and 16 votes against on the condition that some articles are revised before the second reading.

During deliberations on the bill, Financial and Economic Affairs Committee Chairman MP Salaah Khourshed informed the Assembly through a media presentation that a total of 14 meetings were held to ensure the bill does not disrupt or contravene current social security procedures, void of constitutional violations and protects the welfare of retirees.

He said more than 7,500 current employees will benefit from this bill; in addition to the possibility of generating the same number of job opportunities. “This is the most significant law passed by the Assembly considering it is a popular demand,” he asserted. On the other hand, Minister of Finance Naif Al-Hajraf affirmed the bill is constitutional and does not take the rights of any retiree or those insured.

“It is fair, balanced and beneficial to all those registered,” he stressed. He pointed out the Public Institution for Social Security (PIFSS) will incur a certain cost in the long run due to this law, but the institution will work towards shouldering this cost.

The government, during discussions with the committee, proposed that the insured individual must shoulder five percent of the total amount but they compromised later and reduced it to two percent while the public treasury will shoulder the remaining three percent.

This will also prevent employees from racing towards early retirement since the government is in need of expert hands. Despite the assurances given by the committee and the minister, some MPs voiced pessimism stating there are traces of constitutional violations, citing distinction between married and single women.

Others argued the bill is not as complete as the minister proposes, indicating there are disadvantages in the provisions. These MPs also described the minister’s presentation as vague and lacks solid statistics; claiming that with the approval of the committee, the government completely changed the bill so they decided to vote against the bill in both readings.

Nonetheless, majority of the Assembly members agreed to cooperate and approved the bill in its first reading provided the parliamentary comments and proposed amendments will be taken into consideration before the second reading. MP Adnan Abdulsamad stated, “The current form of the bill is not what the Assembly hoped for, so let it be approved on a give and take basis.”

In another development, MPs also  emphasized the importance of the bill on regulating exchange of credit information for the country to keep up with future developments, as the bill fills a legislative gap in this area; thereby, protecting public funds from corporate greed. The bill was approved in its first reading with 44 votes in favor and eight against.

Furthermore, during the discussion of referrals and incoming letters, the Assembly approved the following:
■ MP Mohammed Al-Dalaal’s proposition to instruct the Educational, Cultural and Guidance Affairs Committee to prepare a report on the plan of the Ministry of Higher Education to utilize the space currently belonging to Kuwait University in line with the new Shadadiya University,
■ Educational, Cultural and Guidance Affairs Committee’s request to refer the proposed construction of desert entertainment venues to the Public Utilities Committee in accordance with Article 58 of parliamentary internal regulations,
■ Request of the Flood Crisis Investigative Committee to obligate the State Audit Bureau (SAB) to prepare a report on the financial, technical and legal aspects of the issue.

The report should be submitted to the Assembly within two months. Meanwhile, National Assembly Speaker Marzouq Al-Ghanim expressed his deepest regret over the death of former MP Ismail Dashti. In his speech at the National Assembly’s ordinary session on Tuesday, Al-Ghanim said that Dashti was a prominent politician who exerted great efforts to fulfill the needs of Kuwaiti people during his service in 1975.

Minister of Public Works and Minister of State for Municipality Affairs Hossam Al-Roumi said he is still in position and executing all of his duties, while still waiting for the government’s decision regarding his resignation request. This came as a response to the MPs’ discussion of a letter sent by head of the parliamentary committee for investigating the rainfall damage Adel Al-Damkhi.

In the letter, Al-Damkhi requested the Audit Bureau to present a thorough report on financial and technical damage. On his part, Minister of Education and Minister of Higher Education Hamid Al- Azmi noted that the Kuwait University council will decide on the current locations of the university’s faculties. His remarks were made after discussing a letter from MP Mohammad Al-Dallal requesting tasking the parliamentary committee on education affairs and guidance to present a report on the Ministry of Higher Education’s plan on setting the right locations for the faculties. The National Assembly, during Tuesday’s regular session, approved a bill regulating exchange of credit information.

Forty-four MPs voted in favor of the bill and eight disapproved, out of the present 52 members of the Parliament. The bill includes several terms, such as an authorization is required from the client for examining his (her) personal data and information, according to rules set by the executive laws.

One term prohibits the gather or dissemination of information concerning private life of the concerned client, his (her) opinions, beliefs or health condition. Credit information companies’ activities must be overseen by the Central Bank of Kuwait (CBK) to ensure their adherence to the laws and the CBK-issued rules and guidelines.

The CBK is entitled to obtain all credit data, information and reports from the company data base. These credit information companies must be shareholding. Capital of each must not be less than KD 25 million ($82 million).

The bill sets as a punishment: one year behind bars, with a fine no higher than KD 5,000 ($16,000), or one of the two penalties, against ones who break confidentiality, access to clients’ data without their consent, alter information or present inaccurate information