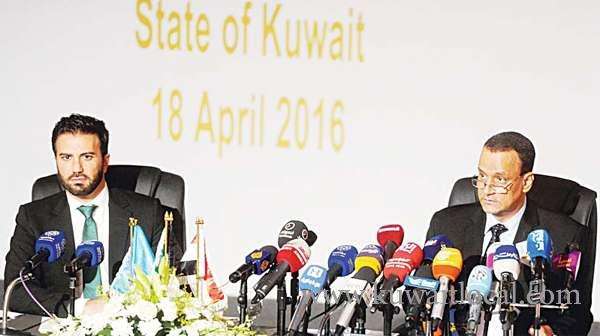 Inter-Yemeni talks will resume in a month at a venue to be determined later, said the UN trouble-shooter for Yemen on Saturday. Ismail Ould Cheikh Ahmed, speaking at a news conference, stressed on necessity of maintaining “a positive spirit to push the consultations forward for sake of peace”. The Kuwait-hosted consultations paved way for the aspired accord “which we hope to see soon” for resolving the Yemen strife and tackle thorny issues, he added, considering that the mere fact that delegations of the parties sat together at the negotiating table was “an accomplishment in itself”. Major hurdle that faced the consultations was lack of confidence among the Yemeni parties; therefore “we emphasized necessity of ceding concessions,” the international envoy added.

He urged the parties to take steps to rebuild the confidence, pursue release of prisoners and abstain from measures that may pose a threat the peace process. The delegations that had taken part in the consultations for 90 days would depart Kuwait later today, said Ismail Ould Cheikh Ahmed, the UN envoy for Yemen. He affirmed “the commitment to pursuing the consultations and holding further face-to-face sessions” that would be held in a month. Cheikh Ahmed added that venue for the planned follow-up talks would be “agreed upon” later. The UN envoy said that the inter- Yemeni talks would enter a new phase to focus on working separately with the warring parties to crystalize the details of the talks.

The structure and the mechanisms for the consultations will be altered over the coming weeks, as the Yemeni parties will be offered a chance to consult with their leaderships, and “we will work with each separately to crystalize the minute and technical details”. Cheikh Ahmed noted that they are working with deliberation, study and foresight, for a sustainable solution in Yemen, warning that any hasty one would be “truncate”. He noted that all his efforts would not lead to a full solution unless the Yemeni parties work for it. He held them responsible for any delay on the path for peace.

In the meantime, the UN official referred to the hard conditions in Yemen, especially the economic situation, urging all parties to join efforts so as to avoid throwing further burdens on the Yemeni people. Dissolving the economic crisis in Yemen relies on the political solution, the envoy said, adding that the economic conditions in the country are worthy setting off the alarm bells. The UN trouble-shooter highly appreciated Kuwait for hosting the Yemen consultations, thanking the peace-supporting international community.

Choice
Hosting the negotiations, Kuwait has proved it is a pioneer in keenness on peace, and the choice was basic in what has been achieved, Cheikh Ahmed said, highly appreciating His Highness the Amir Sheikh Sabah Al-Ahmad Al-Jaber Al-Sabah, and his wise leadership and personal intervention sometimes during the consultations. He also valued efforts by First Deputy Prime Minister and Foreign Minister Sheikh Sabah Al-Khaled Al-Hamad Al-Sabah. The meetings held over the past weeks have produced several recommendations, topped with renewing commitment to rules and conditions of ceasefire as well as reactivating the mechanisms for fully and urgently implementing it.

They also included facilitating taking urgent measures to guarantee safe delivery of the humanitarian aid and basic commodities, besides remedying the economic situation at home, and releasing political prisoners, and those arbitrary detained, among them one covered by the UN Security Council Resolution 2216. The recommendation called for refraining from any escalation, or decisions, that are likely to undermine the opportunity for holding consultations and reaching a solution. In addition, they stressed commitment to carry on with the consultations within a month, he said.

The negotiating delegations will also include military experts. Hopefully, these points will help provide a favorable atmosphere to continue the dialogue for a comprehensive and a full solution, the envoy said, urging the Yemeni parties to respond, and commit themselves to the Kuwait sessions outcome and to offer further concessions and guarantees. All parties realize that Yemen is a nation for all Yemenis, and fateful decisions have to be all-inclusive and not unilateral, Cheikh Ahmed stressed, noting that the UN has devoted all potential to serve the path for peace in Yemen, but only Yemenis are capable of moving their country to such a phase, and those concerned have to assume their responsibilities. Responding to reporters’ questions, the UN envoy said that he is still optimistic over the continuation of peace talks on Yemen.

There is an opportunity to return to the negotiations table, as the involved parties are committed to this, he said. Cheikh Ahmed noted that the choice that Kuwait would host the future consultations, is still tabled, referring to the support and facilities the country offered to guarantee success for the peace talks. In a reply to a question, the envoy rejected he is siding with a certain party against another. Referring to the announcement of the Ansarullah and the General People’s Congress (GPC) of a presidential council in Yemen, the UN official said it is a unilateral step that will serve the Yemeni people.

Meanwhile, Yemen’s rebel Shiite Houthis and forces loyal to their ally, former president Ali Abdallah Saleh, on Saturday appointed a council to govern Yemen, in a new blow to UN-led peace talks. The announcement came as the United Nations prepared to suspend peace talks in Kuwait. The rebels announced the creation of the council on July 28, shortly before rejecting a UN peace plan because it did not meet their key demand for a unity government. That condition amounts to an explicit call for the removal of the internationally recognised president, Abed Rabbo Mansour Hadi. The Iran-backed Huthis overran the capital in late 2014 before moving into other parts of Yemen, prompting a Saudi-led coalition to intervene in March last year. The United Nations says more than 6,400 people have been killed in Yemen since then, mostly civilians.

The fighting has also driven 2.8 million people from their homes and left more than 80 percent of the population in need of humanitarian aid. Hadi’s government, which accepted the UN peace plan, has denounced the creation of the council. UN envoy Ismail Ould Cheikh Ahmed said it would damage the talks and represented a “grave breach” of UN Security Council Resolution 2216. The governing council includes 10 members, equally divided between Huthi and Saleh loyalists, according to a list published by the Huthi-controlled Saba news agency. Among them is Salah al-Sammad, head of the Houthis’ political wing Ansarullah, and Sadek Abu Ras, deputy head of Saleh’s party, the General People’s Congress. In other news, Yemen’s government has asked international financial institutions to prevent central bank officials from accessing state funds held in overseas banks, the state-run sabanew.net news agency reported on Saturday.

The move could exacerbate a humanitarian crisis in Yemen, where a civil war has been raging between the Iran-allied Houthis, who control the capital Sanaa and the central bank, and the internationally recognised government of Prime Minister Ahmed bin Daghr based in the southern port city of Aden. Bin Daghr has received “confirmed information” that the central bank administration is tapping Yemeni foreign reserves held at banks in Europe and the United States after exhausting funds in Sanaa and elsewhere for the war effort, an official at the prime minister’s office told the news agency. “Out of concern for the funds and belongings of the Yemeni people, and in order to preserve the remaining public funds … the Yemeni government has decided to take this step, which includes suspending dealing with Central Bank Governor Mohammed Awad bin Humam”, the official was quoted as saying. The 69-year-old bin Humam had continued in his post after advancing Houthi fighters forced President Abd-Rabbu Mansour Hadi and his government into exile in Saudi Arabia in March last year, precipitating the Saudi-led intervention.

World powers have been concerned about the humanitarian situation in Yemen, where the United Nations says many provinces are on the verge of famine. More than 6,400 have been killed since March last year and some 2.5 million have been displaced. The Yemeni government move came as UN-sponsored peace negotiations in Kuwait ended without an agreement after nearly three months of talks, paving the way for fresh fighting.