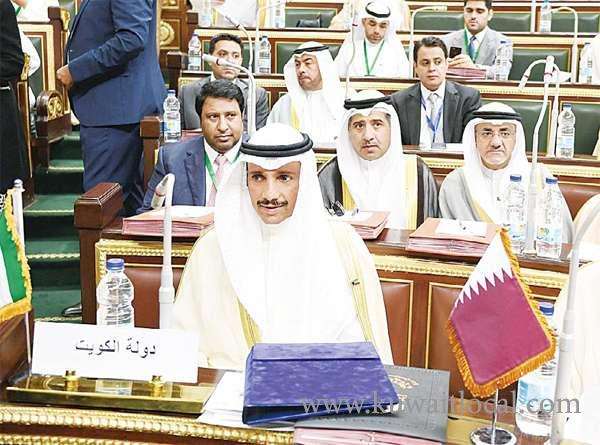 A triumvirate of Kuwaiti parliamentarians have urged the international community to take decisive action over “Israel’s perpetual atrocities against the Palestinian people.” “We need an appropriate and responsive action that addresses the reality on the ground,” Kuwaiti MP Dr Abdullah Abul told KUNA at the end of the 28th extraordinary session of the Arab Inter-Parliamentary Union on Saturday.

Abul emphasized that “Israel’s transgressions should cease immediately,” saying that Arab states would continue to stand by the Palestinians until their aspirations for statehood ultimately turn into reality. Another Kuwaiti lawmaker, Ali Al-Diqbasi, said that his country is “honored to be at the forefront of Arab nations to have supported the Palestinians.” He went on to say that the gathering, requested by Kuwait’s chief lawmaker Marzouq Al-Ghanim, represents a “stand against the violent crimes Israel has committed against the Palestinian people.” Similarly, Kuwaiti MP Ouda Al-Ruwaie urged the entire Arab region to work as a cohesive unit on a much larger scale in order to protect the rights of the Palestinian people.

Al-Ruwaie echoed His Highness the Amir of Kuwait Sheikh Sabah Al-Ahmad Al-Jaber Al- Sabah’s recent remarks at a conference in Istanbul, in which he referred to the Israeli-Palestinian conflict as a perennial concern. An unprecedented degree of outrage has swept over the wider Arab region in the wake of recent developments in the Israeli- Palestinian conflict, including the US’ recognition of Jerusalem as the capital of Israel. More recently, the Israeli parliament adopted a “Jewishnation state” law declaring that only Jews have the right of selfdetermination in the country, drawing the ire of the Palestinians and many Arab nations who have described it as explicitly racist.

The Israeli Knesset’s approval of the “Jewish nationstate” law required a strong Arab rebuttal to save the Palestinian cause from its current dire situation, said Speaker of the Kuwaiti National Assembly Marzouq Al- Ghanim Saturday.

Speech
Delivering his speech to the 28th session of the Arab Inter- Parliamentary Union, Speaker Al-Ghanim affirmed that the Palestinian cause has a geopolitical and security significance, which required utmost attention on part of the Arab countries.

Al-Ghanim cited His Highness the Amir of Kuwait Sheikh Sabah Al-Ahmad Al-Jaber Al- Sabah’s speech at the recently held Istanbul OIC extraordinary summit, which mainly focused on the Palestinian cause and its importance to regional stability and security.

The Kuwaiti top parliamentarian warned of the serious consequences of ignoring the just cause of the Palestinian people, affirming that if the matter was left unsolved, the issue will have an impact on the Arab world. Speaker Al-Ghanim called on his Arab brethren to rise above the feelings of loss and desperation, focusing all needed efforts to resolve the dilemmas threatening the Palestinian cause.

The Israeli aggressors are keen on pushing Arabs towards mental and moral defeat; however, this should be countered with solidarity and a firm stance to foil Israel’s attempts at Arab and Islamic disunity, said Al-Ghanim. He affirmed that the State of Kuwait, along with all Arab and Islamic nations, would find a way to resolve the Palestinian cause once and for all to ensure justice will prevail. The Arab League’s Secretary General Ahmad Abul-Gheit has called for a broad investigation into “Israeli atrocities committed against Palestinians and its de facto blockade of the Gaza Strip.”

The Israeli-Palestinian conflict is at a perilous juncture in the aftermath of US President Donald Trump’s decision to recognize Jerusalem, which has long been a flashpoint for violence, as the capital of Israel, an Arab League diplomat said at the 28th extraordinary session of the Arab Inter- Parliamentary Union on Saturday.