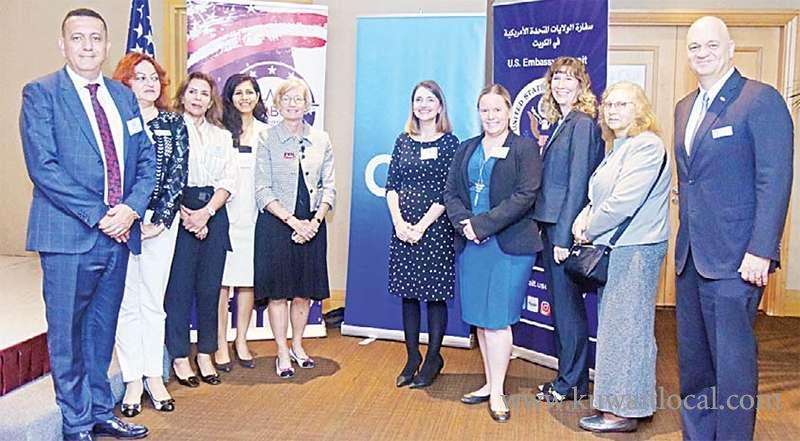 On Sunday, September 22, the American Business Council Kuwait, the US Embassy of Kuwait, and Women Mentor Forum jointly held their first Women in Finance event in collaboration with Citibank Kuwait.

The event kickstarted with an opening speech delivered by Fatah Adour, Chief Executive Officer of Citibank Kuwait, in which he welcomed guest of honor, Dr Catherine Mann, and the distinguished guests: “We are pleased to be partnering with The American Business Council, Women Mentor Forum, and the US Embassy to host Dr Catherine Mann in her first visit to Kuwait. We are also happy to have the new Senior Commercial Officer from the US Embassy Kuwait, Ms Shari Stout, here with us this morning.”

Mr Adour then discussed the event’s agenda and Citibank’s future plansafter which he introduced Dr Catherine Mann and the moderator Ms Besma Al Qassar, Women Mentor Forum’s Founder & President. A discussion then followed between Dr Catherine Mann and Ms Besma Al Qassar where they discussed topics such as globalization, climate change, issues impacting women in the financial sector, and opportunities for women in emerging markets such as FinTech.

“The general view is that demographics slow the labor force and so that means that long term growth will be slower. I disagree with that. Not everyone has the common demographics like these economies, there are countries where the younger people are a large proportion of the population. In addition, 60 is the new 40,just because societies age that doesn’t mean they need to be less productive. Technology is a key driver of business opportunities for change”, said Dr Mann highlighting the synergies that exist between the younger and older generations and how they both contribute to the growth of the economy.

Adding on to that, Dr Mann highlighted how FinTech presents a great opportunity to be seized for young women as it is an emerging market and there is a lack of women in this field, especially technology. She also expanded on the gender gap and disproportionate male-female ratio in the financial and technology sectors, and how this can lead to biased algorithms, especially when it comes to artificial intelligence where we see gender bias in coding because there are more male coders than females. Following the discussion, Dr Mann entertained questions from the attendees.

In response to a question asked regarding what can be done in Kuwait to encourage young women to enter the fields of economics and sciences Dr Mann highlighted how “It’s important to be involved early on and provide young women with mentors and create visibility for them through networking opportunities. Even before the college level, we can set up programs designed for young women to educate them on the opportunities available and the type of work that they could be doing in the future. It’s important for executives to reach out to school teachers and take the initiative to do that and show students the real-life applications of what they’re learning in school”.