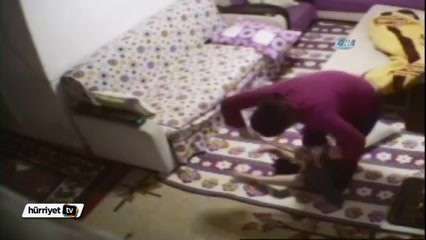 A horrific video from Turkey which shows a woman physically abusing two kids has gone viral.

According to reports by Turkish media, the woman who is a stepmother to the kids had been beating them with a wooden rod for quite some time.

She is seen beating a little boy on the soles of his feet with a wooden rod and at one point appears to cover his mouth, briefly suffocating him.

She is also seen holding the boy's legs and dragging him on the floor continuously.

The incident which happened in Kayseri, Turkey, was recorded after the father of the kids suspected that his children were not being treated well by their step mother. He had seen scars on the children.

He put some security cameras inside his house and discovered after watching the videos that his wife had been treating the children cruelly in his absence.

Reports say the father went to the police to lodge a complaint after watching the video. The woman was then arrested. She has been sentenced to 46 years in prison.

Watch video below. Warning: Some Viewers may find scenes of the video disturbing.

Expats Leaving Kuwait Creates Tremor In Real Estate While the airport is crowded with people departing the country and some areas in the country are still under isolation, several real estate buildings are starting to empty. This has become a familiar ... June 30, 2020 0 14618 Category: Expats

India Bans 59 Chinese Apps Including TikTok, Helo, WeChat The government has banned 59 Chinese applications including top social media platforms such as TikTok, Helo and WeChat in order to counter the privacy security posed by these appli... June 29, 2020 0 5611 Category: India

Public Expats To Go … Not Doctors And Nurses Senior government sources said in exclusive statements that Civil Service Commission has only two years to reach the ratios approved in 2017 concerning the plan to replace expatriates with Kuwaitis in... June 29, 2020 0 5002 Category: Expats

120 To 130 Flights Daily From 1st Aug – PCR Test For Incoming Passengers The Council of Ministers approved operation of commercial flights for arrivals and departures from Kuwait International Airport starting from 1st August, with an operations of not more than 30% in the... June 30, 2020 0 4507 Category: Kuwait

600,000 Dinars Spend At Shopping Malls On First Day After Re-open Heavy sales witnessed in shopping malls and commercial centres on the first day of the second stage of return to normalcy after around 110 days of closure. According to the Automated Banking servic... July 01, 2020 0 4017 Category: Lockdown