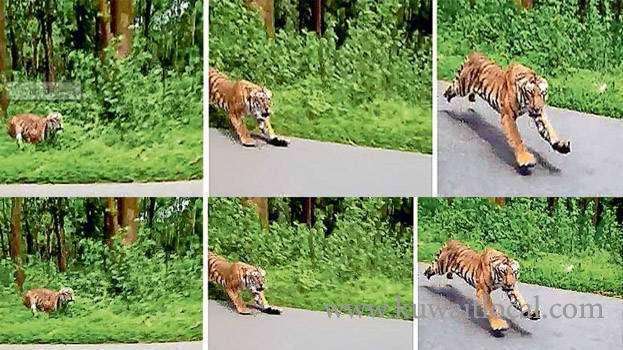 A video captured by riders inside Muthanga Wildlife Sanctuary in Wayanad in Kerala is now going viral on social media due to one reason – it’s scary.

The video shows two people riding on a bike inside the sanctuary when one of them notices a tiger chasing them. For a few seconds, the animal keeps chasing the bike before disappearing into the jungle at the side of the road.

The video was shared on Facebook by Forests and Wildlife Protection Society (FAWPS) – an NGO working towards the protection of forests and wildlife.

A lot is not known about the background of the video. However, while talking to Hindustan Times a moderator from FAWPS said that the people riding the bike were Forest Department officials. They went to patrol the area upon receiving information about a tiger sighting.

The clip created quite a stir among people and they started pouring in different comments. While some were concerned about the tiger, there were a few who dropped funny comments.

“Oh ho just stop and pet the kitty. It just wants to show some love,” joked a Facebook user. Another wrote, “I would have pooped along time ago. Stopped and been eaten!!!” “If humans intrude into areas of tigers, that’s what they will do.” said another Facebook user.