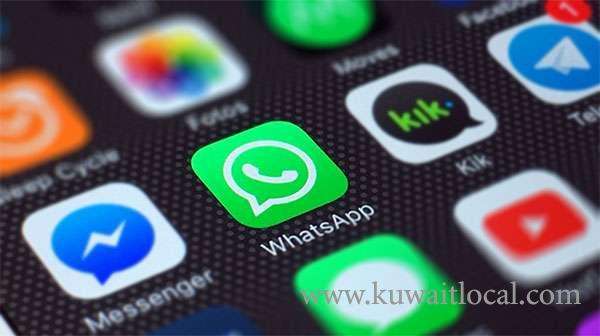 Being the prime means of social media in Kuwait, WhatsApp has become a growing signifi- cant tool used by ministries and state agencies to receive citizens’ complaints and suggestions.

Targeting the largest possible number of people, some Kuwaiti ministries tap this effective technology by means of sending and receiving instant messages encompassing texts, photos, videos and recordings. WhatsApp Web is even applied by several state departments as a quick and easy way to use WhatsApp messages on computers, with on-duty staff receiving queries and giving immediate replies. Speaking to KUNA about this impressive technology, senior officials of public relations and media at several ministries and state bodies said that the mounting use of WhatsApp service is undoubtedly a source of pride to them. The Interior Ministry’s Media and Public Relations Manager Nasser Busleib said that the ministry uses WhatsApp as an effective type of communication between its various units and citizens.

The ministry has got specialized and efficient staff working round the clock to get complaints and proposals from citizens and residents, and reply to them at once, Busleib boasted. But, the official urged people to avert using WhatsApp services while driving otherwise they would be brought to book. Kuwait Municipality’s Public Relations and Media Manager Mohammad Al-Muteiri said WhatsApp is, in fact, an appropriate and effective tool of social communication that helps in setting locations, receiving grievances and remarks and addressing them immediately. However, he lamented that WhatsApp provides a signifi- cant, but limited, service in general while other tools like Twitter and Instagram, for instance, are more useful and valuable. On her part, the Ministry of Electricity and Water’s Social Media chief Khadeeja Meshari said there has been a widescale application of this technological service since it was initially launched at the ministry’s various departments. She acclaimed the use of WhatsApp at state agencies as an impressive type of social communication that has become very common in the Kuwaiti society in general.

WhatsApp services have already been put in place at the ministries of Interior, Social Affairs, Commerce and Industry and Electricity and Water, Public Institution for Social Security, Expropriation of Public Welfare Department, Public Authority for Minor Affairs. Other authorities and bodies are expected to follow suit in the near future.