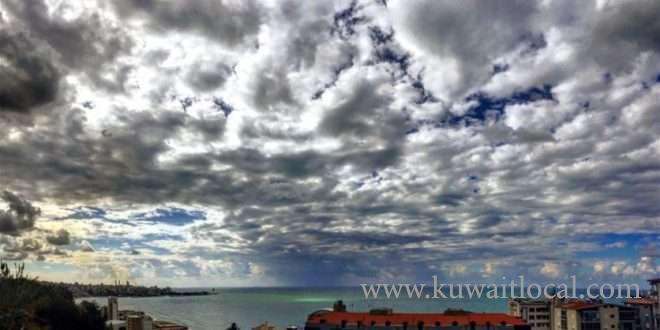 Maximum temperature is in the range of 33-35 degrees, while at sea waves have reached 4-7 feet, Al-Qarawi said. At night, the weather will be cloudy and the dust will recede gradually. In the coastal areas, the winds are blowing at 20-45 km/h.

The heat during the night is forecast to drop to 16- 18 degrees. The weather will begin to improve gradually, with unsteady northwesterly winds blowing at 15-40 km/h. There will be scattered mists and the maximum temperature will range between 30 and 33 degrees. On Saturday night, it will be partially cloudy with unsteady northwesterly winds at 15-35 km/h.

Lowest heat will range between 13 and 17 degrees. Meteorologist Jamal Ibrahim said the country has been affected by the air block coming from Saudi Arabia that caused movement of winds from southeast to northwest at a speed of 60 kilometers per hour in some desert areas, reports Al-Qabas daily. Speaking to the daily, Ibrahim confirmed that the weather condition will improve gradually, disclosing there will be slight rainfall in the coming days. He added the weather on Monday and Tuesday will be moderate.

He explained the period starting from April 1 to April 15 is known as ‘pre-sarayat’ season, while ‘sarayat’ will be from April 16 until the end of May. Kuwait Fire Service Directorate (KFSD) urged citizens and expatriates namely sea-goers to take precautions due to the unstable weather. Wind speed may exceed 70 km/h, along with visibility drop to less than 500 meters in some regions, the KFSD said in a statement, also forecasting rain and rise of sea waves to more than seven feet. It advised sea-goers to sail back to land or wait on one of the islands until the weather improves.

All fire personnel are on alert and all necessary preparations have been taken to deal with emergency and humanitarian cases (hotline: 112). The Interior Ministry urged motorists to be cautious of weather conditions and visibility ebb in some regions. The MoI warned the drivers to be aware of any obstacles on the roads and advised them to drive slowly. The ministry is reachable for any emergency on the hotline 112.