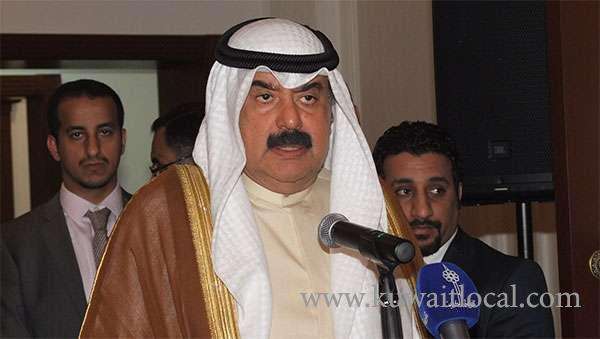 Kuwaiti Deputy Foreign Minister Khalid Al-Jarallah said on Wednesday that Kuwait is looking forward to strengthening ties with the United Kingdom, adding that Kuwait feels safe when it has an ally like the United Kingdom. In a statement to reporters on the sidelines of his participation in the ceremony of the Ministry of Information and the British Embassy on the occasion of 120 years of friendly relations, Al-Jarallah said that Kuwait has many mechanisms for cooperation to strengthen bilateral ties; topped by the Joint Steering Committee.

He added that the meetings of the Joint Steering Committee, which reached 14 sessions, added a lot of construction to that distinguished relationship He expressed Kuwait’s satisfaction, happiness and pride in the historic relationship with Britain, which was built on respect, continuity and common interests between the two countries, pointing out that this relationship went through many different stations.

He praised Britain’s support for the liberation of Kuwait by then British prime minister Margaret Thatcher in forming the nucleus of determination to liberate Kuwait, praising her heroic role to defend the sovereignty and stability of Kuwait, a role that many men can not do. He said that the Kuwaitis recall such stances with respect and appreciation.

The “historic” ties between Kuwait and the United Kingdom, which date back more than two centuries, have always stood the test of time, said Kuwait’s Deputy Prime Minister and Foreign Minister Sheikh Sabah Khaled Al-Hamad Al-Sabah on Wednesday during the ceremony.

“The UK has proven to be a trustworthy partner over the years and has stood by Kuwait through thick and thin,” the minister emphasized, saying that history is dotted with such instances. He went on to thank the Kuwaiti ministry of information and the British Embassy for organizing the lavish ceremony to “remember an event deeply entrenched in the Gulf state’s history.”

On the Anglo-Kuwaiti agreement of 1899, he said it served as the launchpad for the UK’s contributions towards security and peace in Kuwait, efforts the minister pointed out were instrumental in the development of the Gulf state.

Citing Kuwait’s independence in 1961 as a great watershed, he said it helped usher in higher levels of camaraderie between the country and the UK. Britain has always been at the forefront of nations to have helped keep Kuwait out of harm’s way, the minister explained, reminiscing about how the UK contributed immensely towards Kuwait’s liberation from Iraqi occupation back in 1991.

He applauded Britain’s “valor” and unwavering determination to stand by Kuwait during the 1991 Gulf war, an act he said “the Kuwaiti people will forever be grateful for.” “Today we remember a milestone event in our illustrious histories,” he said, in reference to the Anglo-Kuwaiti agreement of 1899, expressing his eagerness for bilateral ties to reach new levels.

He pinpointed His Highness the Amir Sheikh Sabah Al-Ahmad Al- Jaber Al-Sabah’s visit to London in 2012 as the catalyst that helped reinvigorate bilateral ties. Kuwait’s foreign minister spoke of “tangible progress” in relations, saying the Gulf state’s investments in London have soared over the years, a byproduct of the vibrant trade relationship both countries enjoy, with trade volume hitting more than $4.5 billion last year.

Ties on the educational front have also been promising, he added, saying the number of Kuwaiti students pursuing higher education in the UK has multiplied, putting the figure at more than 6,000. The ceremony brought together a bevy of senior Kuwaiti state officials and ministers.