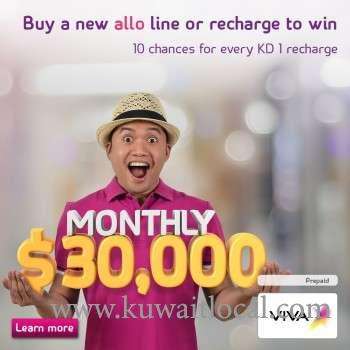 VIVA, Kuwait’s fastest-growing and most developed telecom operator, revealed the second week winners of the all new “allo” draw for its prepaid customers.

The names of the $1,500 daily prize were as follows: Hawraa Hussain Ali Aljadi, Shafqatulla Khan Azizullah Khan, Tariq Mohammed Al Ali, Laksman Lal Dolaji, Mohammed Jameel Abu Zaid, Mishal Abdulamir Abdulrasol Alkhayat, Nawal Salem Mudhhi Almutairi. Winners will be announced throughout the campaign with a grand total of almost $ 150,000 to give away! VIVA customers can enjoy this wonderful opportunity to win amazing cash prizes of $ 1,500 daily and $ 30,000 monthly,
; throughout the campaign by simply buying a new “allo” line or recharging their current line through Direct Debit, VIVA website, VIVA’s Kiosks, VIVA App or by calling 102. Every KD 1 spent, earns VIVA customers 10 chances to win, increasing their winning chances the more they spend.

VIVA is the fastest-growing telecom operator in Kuwait. Launched in December 2008, VIVA makes things Possible for its customers by transforming communication, information and entertainment experiences. The company has rapidly established an unrivalled position in the market through its customer centric approach. VIVA’s quest is to be the mobile brand of choice in Kuwait by being transparent, engaging, energetic and fulfilling. VIVA continues to take a considerable share of the market by offering an innovative range of best value products, services and content propositions; a state of the art, nationwide network and world-class service. VIVA offers internet speeds of more than 100 Mbps, due to the implementation of the most advanced fourth generation (4G LTE) network in Kuwait resulting in superior coverage, performance and reliability.