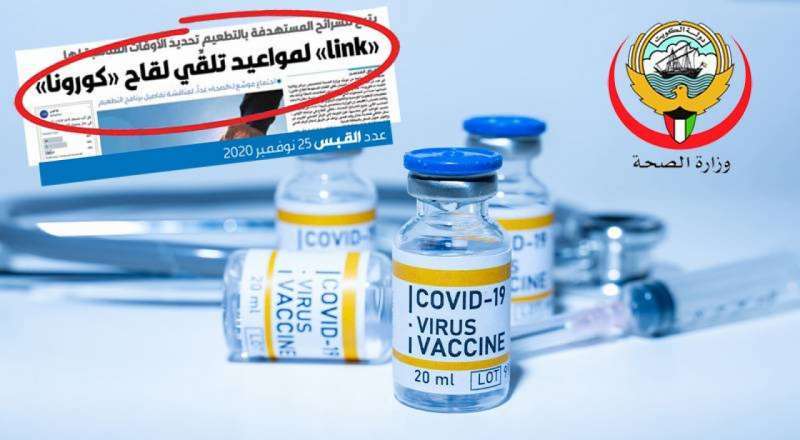 Ministry of Health launched a link yesterday through its website, to record the requests of citizens and residents wishing to receive Corona vaccines as soon as they are approved and arrived in the country.

Health sources revealed to Al-Qabas that the link will ask the concerned person for his phone number, passport, civil number and serial number behind the civil card, to ensure that he is granted a certificate of receiving the vaccine upon completion, so that he can travel to any country, confirming that the site currently receives registration of requests in preparation for sorting it A few days before the arrival of the vaccine.

She explained that there are 5 categories that will be excluded from receiving the vaccine, namely: pregnant women under 18 years of age, those with infectious diseases, those who received vaccinations for the last 30 days, and those suffering from allergies to certain foods and medicines.

Regarding those who refuse to receive the vaccine from the groups included in taking it in the first stage, the sources revealed that these will face the dilemma of restricting their travel to countries that will require a certificate of receiving the vaccine to enter their territories.

According to the sources, the health authorities in the country aim to give the vaccine to a quarter of the vaccinated groups within 6 months.

The Minister of Health Dr. Basil Al-Sabah confirmed in a statement yesterday that the vaccination will be provided in the country after it is approved by the international official authorities, hoping that it will be approved before the end of the current year, to start the vaccination campaign in stages according to priorities, leading to the completion of the vaccination of the majority of citizens and residents.

On the places of vaccination, Al-Sabah said: “Through a hall prepared in the fairgrounds in Mushrif, it will be the largest at the level of the region, and the ability to vaccinate may reach 10 thousand people per day,” indicating that preparations are underway for two other sites in Jahra and Ahmadi, to enable Complete the process smoothly.

Here are the details

While the medical and popular circles are waiting for the arrival of the first batch of contracted Corona vaccine doses, the Ministry of Health and other parties concerned are preparing to receive and store them, in parallel to work on preparing the vaccination hall with the vaccine in the exhibition grounds and planning to prepare two other sites in the Jahra and Ahmadi governorates to receive Citizens and residents later to receive the vaccine.

In confirmation of what Al-Qabas published in its issue dated November 24, the Ministry of Health identified the link on its website, with the aim of registering the requests of citizens and residents wishing to receive Corona vaccines as soon as they are approved and arrived in the country within the coming days, according to expectations.

Informed sources in the Ministry of Health confirmed that registration is available to everyone, but that the eligible groups were determined according to the priorities of the ministry upon the arrival of vaccinations, and then a text message is sent to the citizen or resident included in the first stage of receiving the Corona vaccine, indicating that pregnant women and those under 18 In general, they will not be among the target groups for vaccines, and therefore it is not possible to register them on the site.

The sources added to Al-Qabas that there are segments that will not be received in the new link, such as pregnant women, people who suffer from allergies to some foods and medicines, and those with infectious diseases, as well as anyone who received any vaccinations such as «vaccinations for seasonal influenza and pneumonia» within 30 days, pointing out that The link requires providing him with some information about the applicant to receive the vaccine.

The sources indicated that the link asks the person concerned with his phone number, passport, civil number and serial number behind the civil card, to ensure that he is granted a certificate of receiving the vaccine upon completion, so that he can travel to any country, confirming that the site currently receives registration of applications in preparation for sorting them before the arrival of the vaccine In a few days.

In addition, the Minister of Health, Dr. Basil Al-Sabah said that the provision of the Corona virus vaccine in the country will be after its approval by the international official authorities, expressing his hope that the accreditation will take place before the end of the current year, and then the start of the vaccination campaign in multiple stages according to priorities, leading to the completion of the vaccination of most citizens and residents on this earth Kindness.

The Minister Al-Sabah said in a statement to reporters yesterday about the places of vaccination: “This will be through a hall prepared in the exhibition grounds in Mushrif, as it may be the largest in the region, and the ability to vaccinate may reach 10 thousand people per day,” indicating that preparation is underway For two other sites in Jahra and Ahmadi, so that the process can be completed smoothly.

Minister Al-Sabah indicated that a special program has been prepared for the vaccination mechanism to preserve time and the safety of procedures, and the person who will take the vaccination will receive a certificate that will be received on his mobile phone, with the quality of the grafts, their date and passport number, if he may need it for travel in the future.

Regarding the vaccine manufacturers that have been contracted with, Al-Sabah referred to the agreement with the two companies, "AstraZeneca and Pfizer", as well as 9 vaccines that will be selected soon through the "Kovacs" program within the Global Vaccine Alliance.

Yesterday, Thursday, the Red Crescent Society handed over a mobile medical clinic equipped with all equipment and medical devices to the Ministry of Health, with the aim of supporting health care services in the country.

The head of the Board of Directors d. Hilal Al-Sayer said that the clinic’s handover comes within the framework of the association’s efforts, as a continuation of its initiatives to actively participate in the efforts of the Ministry of Health and its great medical and humanitarian role, stressing the provision of all support and assistance to community initiatives.

Al-Sayer explained that the mobile medical clinic was provided with all the necessary medical equipment, including the X-ray machine and examination equipment, in addition to the laboratory, the operating room, and all the special requirements for medical personnel.

He expressed his thanks and appreciation for the National Bank of the Red Crescent’s donation to provide medical equipment and allocate mobile clinics with all their medical and office equipment and supplies, based on its humanitarian and community role.

The National Bank donation to the clinic is a distinct model for joint work between the various sectors of the state.

2- Opening the link to receive requests for those wishing to take the vaccine.

3- Register the name and phone number.

4- Write down the passport number.

5- Registration of the civil number.

6- Writing the serial number on the back of the civil ID.

8- Follow up on phone messages later to determine the appointment.

1- People with food or drug allergies.

3- Those who received vaccinations within 30 days.