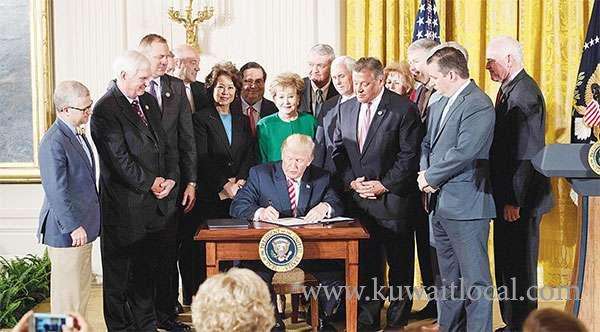 US President Donald Trump accused his own Justice Department on Monday of watering down his temporary travel ban on people from several predominantly Muslim countries, potentially hurting his case in the Supreme Court on the matter.

In a series of early morning Twitter messages, Trump returned to the issue of the travel ban that he raised immediately after an attack in London on Saturday night that killed 7 people and wounded 48. Legal experts said Trump’s tweets could complicate his legal team’s defense of the ban, since they contradict some of the arguments the government’s lawyers are making in court.

Trump has presented the measure, which seeks to halt entry to the United States for 90 days for people from Iran, Libya, Somalia, Sudan, Syria and Yemen and bar refugees for four months, as essential to prevent attacks in the United States. Critics suing the government, including states and civil rights groups, say there is little national security justification for the move and the ban is discriminatory against Muslims.

Federal courts have stopped it from being enforced. “The Justice Dept should have stayed with the original travel ban, not the watered down, politically correct version they submitted to SC,” Trump tweeted, referring to the country’s highest court. “The Justice Dept. should ask for an expedited hearing of the watered down travel ban before the Supreme Court — & seek much tougher version!” Federal courts struck down Trump’s first temporary travel ban, an executive order he issued a week after taking office on Jan 20.

To overcome the legal hurdles, he replaced it with a new order in March. The second ban was also put on hold by courts. The Justice Department says the courts should look only at the text of the order, not at the president’s comments during the 2016 election campaign about imposing a ban on Muslims. “His tweets invite the question: if the second ban is ‘politically correct,’ what is un-P.C. about the original? And the answer is obvious: Trump told us it’s about banning Muslims,” said Micah Schwartzman, a professor at the University of Virginia School of Law.

Criticizing
Trump, whose populist brand of politics includes criticizing political correctness as an evasion of uncomfortable truths, called in a statement on his campaign website for a “complete shutdown of Muslims entering the United States.” “The President’s tweets may help encourage his base, but they can’t help him in court,” said Jonathan Adler, a professor at the Case Western Reserve University School of Law. Trump’s legal team asked the Supreme Court last week to reverse rulings by lower courts and allow the revised travel ban to go into effect immediately.

At issue before the court is whether the travel curbs violate the US Constitution’s ban on favoring one religion over another. The revised order removed language barring legal permanent residents and a clause that protected religious minorities. It also removed Iraq from the list of targeted countries. Trump said in an interview with the Christian Broadcasting Network shortly after signing the first ban that it would help Syrian Christians fleeing the country’s civil war, a comment lawyers challenging the ban have pointed to as a sign it meant to favor Christians over Muslims.

White House spokeswoman Sarah Sanders said Trump agreed to modify the language of the first order in an effort to satisfy the concerns of a federal appeals court that halted it, but he preferred the stronger action. “He wants to go as far and as strong as possible under the Constitution to protect the people in this country,” Sanders told a news briefing on Monday. In related news, standing on the bluffs of Roma, Texas on a May afternoon two border patrol agents look out over the meandering Rio Grande River that separates Mexico from the United States and recall a time when the scene was far less tranquil.

Immigrants
Last fall, during the waning months of the Obama administration, hundreds of immigrants crossed the river on rafts at this point each day, many willingly handing themselves over to immigration authorities in hopes of being released into the United States to await court proceedings that would decide their fate.

Now, the agents look out on an empty landscape. Foot paths up from the water have started to disappear under growing brush, with only the stray baby shoe or toothbrush serving as reminders of that migrant flood.

The reason for the change, the agents say, is a perception in Mexico and Central America that President Donald Trump has ended the practice known as “catch-and-release,” in which immigrants caught in the United States without proper documents were released to live free, often for years, as their cases ran through the court system. Now, would-be border violators know “they’ll be detained and then turned right back around,” said one of the two agents, Marlene Castro. “It’s not worth it anymore,” she said. Castro was simply echoing her boss, Homeland Security Secretary John Kelly, who said on a visit to El Paso, Texas in April, “We have ended dangerous catchand- release enforcement policies.” But immigration attorneys, government statistics and even some officials from US Immigration and Customs Enforcement, which falls under Kelly, suggest that despite the DHS chief’s statement, there has been no clear change to the catch-and-release policy.

That’s in large part because there are legal constraints on who can be detained and for how long, due to a shortage of beds and a court ruling limiting the stay of women and children in custody to 21 days. A separate court ruling limits detention time for immigrants whose countries refuse to repatriate them. And Kelly noted in a February memorandum that asylum seekers that have proven they have a “credible fear” of returning home could be candidates for release if they present “neither a security risk nor a risk of absconding.” Daniel Bible, ICE field office director for Southern Texas, told Reuters he and his colleagues have not been issued new directions, and so continue to release illegal immigrants deemed to be low security risks, usually with notices to appear in court.