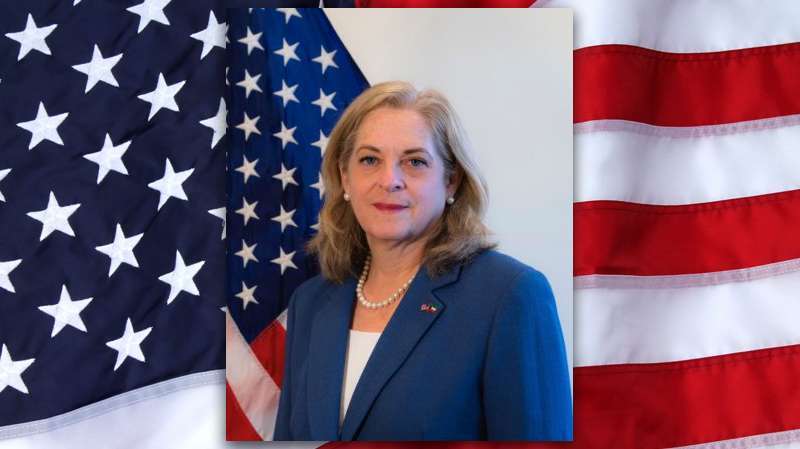 The US Ambassador to Kuwait HE Alina Romanowski said the fourth strategic dialogue between the United States and Kuwait brought the two countries closer, during which several agreements were signed to develop healthcare coordination, law enforcement cooperation, and humanitarian aid around the world, and “we also adopted additional cultural and educational exchange programs.”
She said, last Thanksgiving Day – a day to refl ect on the blessings in our lives that deserve thanks and gratitude – she spent time with her family in Washington. She added, while “I was contemplating what I am grateful for, there was nothing better than that I was celebrating this holiday in conjunction with the conclusion of the fourth strategic dialogue between the US and Kuwait – a dialogue in which six working groups were involved and culminated in a meeting between the Foreign Ministers of the United States and Kuwait in Washington.
She explained, “We have also launched the first meeting of the Working Group on Political Cooperation, Development and Human Rights, which focuses on expanding our official consultations to include regional political and development issues of common interest. “This dialogue shows the great breadth and depth of relations between the United States and Kuwait as well as confirms the undeniable fact that the United States and Kuwait are not just reliable allies, but they are two countries that share a close friendship. In all my meetings with Kuwaitis, I touched a great deal of generosity, hospitality and generosity of Kuwait that transcends its geographical borders, as it provides necessary economic and humanitarian aid all over the world,” she added.
She pointed out that “the United States also has a long record of giving and by signing the Memorandum of Understanding between USAID and the Kuwait Fund, our two countries will now work more closely to provide assistance to countries in need, and as we grapple with the unprecedented challenges of the current pandemic, health care has become more important than ever.” Romanowski said, the epidemic demonstrated the need for all countries to invest in adequate healthcare systems and work together to confront health threats that put us at risk and in this regard, the United States and Kuwait already have a long-term relationship in the medical field where Kuwaiti citizens regularly visit the United States to receive the most advanced medical treatment in the world.
By signing a health MoU between the US Department of Health and Human Services and the Kuwaiti Ministry of Health, the two countries will strengthen cooperation in the fields of public health, biomedical research, medical technology, and medical sciences, she added. She went on to say Kuwait will strengthen its healthcare systems to integrate the latest scientific developments thanks to the exchange of necessary knowledge and best medical practices, and the two countries also cooperate through joint legal efforts to make our two countries safer, and by signing the declaration of intent to negotiate a mutual legal aid treaty, our two countries have committed to strengthening cooperation in the field of law enforcement by establishing a regular channel to obtain evidence for use in criminal prosecutions and investigations in both countries, and this is an important step towards ensuring the safety and security of American and Kuwaiti citizens, whether the threat is from terrorism, cross-border crime, or corruption.
She pointed out that, while Kuwait is working to diversify its economy, American institutions and companies are preparing to enter into a partnership with their counterparts in Kuwait to develop the private sector. American companies have a wealth of experience and knowledge to share with Kuwait and are looking forward to developing opportunities that benefit both parties, and our companies are known for their creative spirit and determination in entrepreneurship and partnerships between US and Kuwaiti companies which will foster innovation and create new businesses, which will boost the economies of the two countries.
She said, “I am proud that five generations of Kuwaitis have studied in the United States, and every year our countries continue to encourage Kuwaiti youth to join the thousands of Kuwaitis who are currently studying in the United States. These students not only gain knowledge from our world-class colleges and universities, but also act as cultural ambassadors and strengthen the bonds of friendship and deepen understanding between our peoples.” “As I look forward to 2021, I am grateful for the strong partnership that we are building together.

Next year, Kuwait and the United States will celebrate 60 years of diplomatic relations as well as the anniversary of Kuwait’s independence. “The two countries share a common perspective, as we focus our focus on the future, the potentials of our two countries and the remarkable achievements we expect to achieve. Thanks to our long partnership, I have a strong belief that our future as our past will be closely related and closely connected. “As a custodian of this special relationship, I believe with confidence and optimism that our two countries will continue to face many global challenges today together as reliable allies and close friends,” she added.