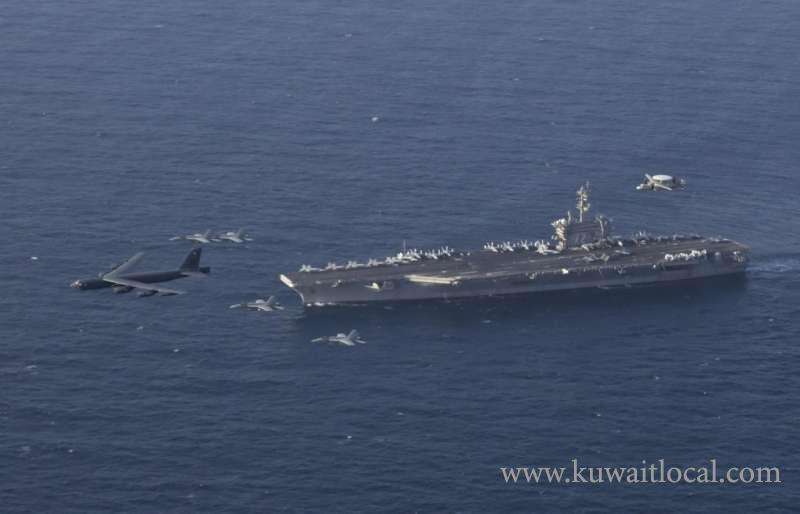 A US aircraft carrier the White House ordered to the Mideast over a perceived threat from Iran remains outside of the Arabian Gulf amid efforts to de-escalate tensions between Tehran and Washington.

The USS Abraham Lincoln on Monday was in the Arabian Sea some 200 miles (320 kms) off the coast of Oman. While US Navy officials repeatedly declined to discuss why they hadn’t gone through the Strait of Hormuz into the Arabian Gulf, they insisted they remain ready to launch any mission in the region.

However, Capt Putnam Browne, the commanding officer of the Lincoln, also told The Associated Press: “You don’t want to inadvertently escalate something.” The White House in May ordered the Lincoln and its strike group to speed to the Mideast. It’s also sent B-52 bombers and ordered hundreds of troops to the area. Tensions with Iran have worsened since President Donald Trump pulled America out of Iran’s nuclear deal last year and imposed sanctions on Tehran.

On the 30th anniversary of the death of Ayatollah Ruhollah Khomeini, the founder of Iran’s Islamic Republic, the USS Abraham Lincoln hosted journalists from the AP and other media outlets. They spent some four hours aboard the vessel after a two-hour fl ight from the United Arab Emirates and were greeted by cameracarrying sailors who documented every part of their four hours onboard.

The day before, the US Air Force announced a B-52 conducted a training exercise with the Lincoln that included “simulated strike operations.” Thousands in Iran mark Khomeini’s death by visiting his golden shrine south of Tehran. This year, Iranian military officials reportedly plan to guard it with Hawk surface-toair missiles, the same kind the US delivered to the Islamic Republic in the Iran-Contra scandal.

However, in recent days, the Trump administration has stressed it is ready to speak to the Iranians without preconditions. Asked about why the Lincoln hadn’t gone into the Arabian Gulf, Rear Adm John F.G. Wade, the commander of the carrier’s strike group, said that his forces could “conduct my mission wherever and whenever needed.” He declined to discuss any specifics about that mission, though he said Iran had presented “credible threats” to the region.

“They do impose a threat to our operations, but also to the safety and security of commerce and trade going through the Strait of Hormuz and that’s why we are here,” Wade said. The Lincoln famously served as the backdrop of then-president George W. Bush’s May 2003 speech declaring combat operations over in Iraq, a banner reading “Mission Accomplished” hanging behind him. The majority of the war’s casualties came after.

EU rejects
The European Union Monday said that it does not accept the extra-territorial nature of US sanctions on Iran. “Our position when it comes to the extra-territoriality of the US measures which we as part of our policy do not recognize,” Maja Kocijanic, spokesperson for EU High Representative Federica Mogherini, told a news conference Monday.

The EU reaction came after recent statements made by the US treasury department’s undersecretary for terrorism and financial intelligence, Sigal Mandelker, who warned that anybody connected with an European special payment vehicle for Iran could be barred from the US financial system.

France, Germany and the UK announced last January the creation of INSTEX to bypass US sanctions on Iran and allow European companies to do business with Tehran, but it is yet to be functional. “I am not in a position to speculate or comment on something that was simply said,” Kocijancic commented and added that the EU position when it comes to the JCPOA (Iran nuclear deal) is clear in preserving the nuclear agreement so long Iran continues to respect its nuclear related commitments. Setting up of INSTEX is part of this work and is not directed against anyone, she added. Reacting to a US offer to talk with Iran without pre-conditions, Iranian President Hassan Rouhani said on Sunday it was Washington that had left the negotiating table, and it “should return to normal state”.

US Secretary of State Mike Pompeo said on Sunday the United States is prepared to engage with Iran without pre-conditions about its nuclear program, but needs to see the country behaving like “a normal nation”.

Rouhani was quoted by the government’s official website as saying: “The other side that left the negotiating table and breached a treaty should return to normal state. Until then, we do not have a choice but resistance.” Qatar said on Sunday it has reservations about hardline statements on Iran made at emergency summits of Gulf and wider Arab states called by Saudi Arabia, becoming the second Arab country to reject the statement following Iraq. Qatar’s foreign minister, Sheikh Mohammed bin Abdulrahman Al- Thani, said statements at the summits were not adopted using traditional procedures. “The statements condemned Iran but did not refer to a moderate policy to speak with Tehran,” he said in remarks reported by Qatar’s state-owned Al Jazeera television.

“They adopted Washington policy towards Iran, rather than a policy that puts neighbourhood with Iran into consideration,” he added. Saudi Arabia’s King Salman convened the emergency summits on May 30 to discuss drone strikes on oil installations in Saudi Arabia and attacks on four vessels, including two Saudi oil tankers, off the United Arab Emirates coast.

Qatari Prime Minister Abdullah bin Nasser Al Thani, whose country hosts the largest US military base in the region, attended the summits, the most senior Qatari official to visit the Kingdom since Saudi Arabia, the United Arab Emirates, Bahrain and Egypt imposed an economic and diplomatic boycott on Qatar in 2017.

The embargo was imposed over allegations that Qatar supports terrorism and is aligning itself with regional foe Iran. Qatar denies the allegations. The right of Saudi Arabia and the United Arab Emirates to defend their interests after the attacks on oil pumping stations in the Kingdom and tankers off the UAE were supported in a Gulf Arab statement and a separate communique issued after the wider summit.