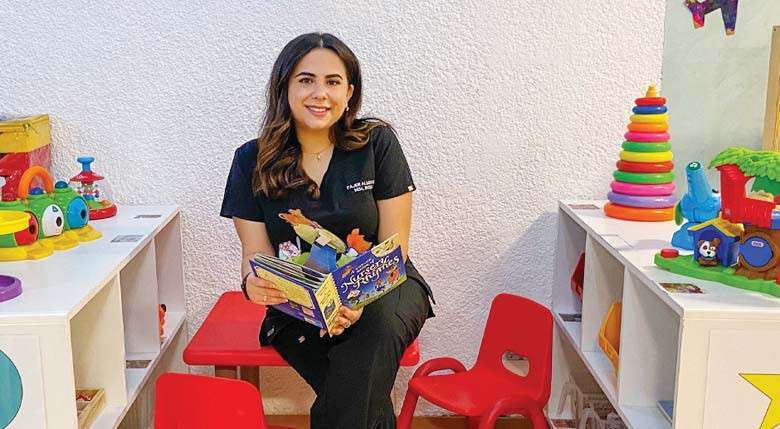 Every morning, the two-year-old arrived at autism clinic crying – for a harrowing 90 minutes. But after two weeks, he walked in dry-eyed and hugged his student therapist. Fajer Almenaie knew then that she finally had landed in the right place, reports news.miami.edu. “That was huge for me,” recalled Almenaie, who earned her Master’s in Applied Behavior Analysis (ABA) from the University of Miami in December 2018. “It was the first time I thought I could make a difference.”

But Almenaie never imagined that, just two years after coming to the University at a crucial crossroads in her life, she would establish the Intensive Behavioral Intervention Services (IBIS) Clinic, the first-of-itskind intervention clinic for children with autism in Kuwait.

Today, Almenaie and the four technicians she trained are the only ABA-certified professionals in her Middle Eastern homeland offering what is scientifically regarded as the most effective therapy for curtailing disruptive behaviors and embedding basic functional skills in young children on the autism spectrum. Following ABA principles – which employ observation, measurement, analysis, and endless repetition to change specific behaviors – is intense, demanding, and tedious work.

Few people are cut out for it. But when Anibal Gutierrez, the founder and director of the University’s five-year-old IBIS Clinic, interviewed Almenaie for one of the 10 spots in the highly selective master’s program, he knew she had found her destiny. Almenaie was unfazed by Gutierrez’s warnings that she would practically live at the Department of Psychology clinic and would be responsible for one little human who would hit her, throw up on her, bite her, and, yes, sometimes cry without end. She made it abundantly clear that she was ready to meet the challenge.

“The beauty of the clinic is that we train future ABA therapists, so we have a ready pool of students who, supervised by four doctoral-level faculty experts, are eager to give kids intense one-on-one attention,” said Gutierrez, who is also associate director of the UM-Nova Southeastern University Center for Autism and Related Disabilities. “But some applicants really have no idea what we do,” he continued.

“They get that deer-in-the-headlights look. What they really want to do is behavioral forensics and work for the FBI. It was obvious from the onset that Fajer was knocking on the right door. She never flinched. She was particularly brave. She always volunteered for the toughest problem. I always had in mind that she would go back to Kuwait and offer something like this.” Located in a small office suite in the Fawzia Sultan Healthcare Network’s Mental Health and Wellness Clinic in Kuwait City, Almenaie’s clinic is nearly identical to the IBIS Clinic, which during the COVID-19 pandemic continues to provide services and training online. The biggest difference: the intensive one-on-one therapy in Kuwait is offered in Arabic and English, instead of English and Spanish. With the support of the network, she has practically cloned the IBIS Clinic nearly 12,000 miles away, with the cheerful wall decorations and toy filled shelves to the multiple-skills stations and the policy that children can be enrolled without a formal autism diagnosis.

“I loved that IBIS provided therapy without a diagnosis, and I follow the same protocol here,” said Almenaie, who started the clinic from scratch last August, after passing the board-certified Behavior Analyst exam. “A lot of parents notice differences in their children, but they’re not ready for a diagnosis. They’re too overwhelmed and distraught. So, if we can ease the parents into this and provide the therapy that will improve behaviors before a diagnosis, we’re giving them a reason to look forward. As I always say, ‘I am not in the service of diagnosing. I am in the service of treating.’ ”

Almenaie was in her own dark place when Gutierrez interviewed her for the ABA master’s program in 2017. She knew from volunteering at the Fawzia Sultan clinic before heading to college that she wanted to work with children on the spectrum. But there was no direct route to that path in Kuwait, where the government pays the education costs for such professions as speech therapy.

So, Almenaie pursued a bachelor’s degree in communication sciences and disorders from Temple University, with the goal of becoming a speech therapist. But an onslaught of rejections derailed her plan. Fifty master’s degree programs in speech therapy turned her down. “I was desperate. At my 50th rejection I was at my breaking point,” Almenaie recalled. “I told my mom, ‘I can’t take this anymore.’ She reminded me I always was a planner and asked for my Plan B. I said I wanted to be an ABA therapist. She had no idea what that was, but she told me to go for it.”

This time, Almenaie applied to only one master’s program, the only one in South Florida that operates an oncampus clinic that would provide her the clinical hours that, in addition to her coursework, she needed to qualify for the ABA exam. “Honestly I really didn’t know what I was in for,” she said. “I wasn’t going in blind, but all I knew was that I had the interest and motivation and was willing to do anything to succeed.” After a brief but rough transition, she began to realize she was exactly where she belonged. It was a realization born from the small triumphs that accompany the big challenges – from the little boy who now knows how to communicate without crying to his mother who could not contain her joy the first time he called her “momma.” “IBIS was the home of so many of my own mini successes,” Almenaie said. “It was really special to see kids who started with minimal communication graduate and go into normal preschool. I am so grateful I am able to bring those small triumphs, which I now know are actually glimmers of hope, to parents in Kuwait.”