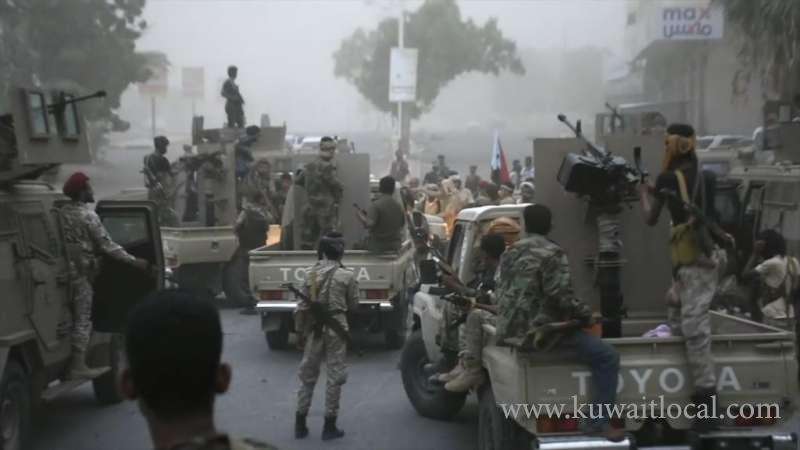 Yemeni separatists backed by the United Arab Emirates began withdrawing Sunday from positions they seized from the internationally-recognized government in the southern port city of Aden.
The Southern Transitional Council had wrested control of the city from government forces after four days of fighting that killed more than 70 people and exposed a major rift in the Saudi-led coalition, which has been battling iran-aligned Houthi rebels in northern Yemen since 2015.

Saudi Arabia and the United Arab Emirates lead the coalition, which is ostensibly fighting the rebels on behalf of the government. But the UAE is the dominant force in the south, where it has an estimated 90,000 allied militiamen and has long been at odds with the government, which is largely based in Saudi Arabia.

The two U.S.-allied Gulf monarchies appear to have diverging interests in Yemen, where the stalemated war has spawned the world’s worst humanitarian crisis and drawn mounting criticism in Washington.
Saudi Arabia views the Houthis as a major national security threat, in part because the rebels have launched numerous cross-border missile attacks targeting its capital and other cities. The UAE, which recently began withdrawing troops from Yemen, appears more interested in securing its interests in the south – which lies along major trading routes linking Africa to Asia – than waging a war that appears increasingly unwinnable.
Saudi Arabia had responded angrily to the takeover in Aden, calling for an immediate cease-fire and ordering the separatists to pull back as Saudi troops moved to secure government buildings. On Sunday, Saudi state TV reported that the separatists had begun withdrawing.

The coalition said Sunday it struck a target that posed a “direct threat” to the government, without elaborating, and warned of further military action if the separatists did not pull back.

Yemeni officials said the UAE-backed fighters had withdrawn from the streets but still held military positions seized in recent days and were still stationed outside the presidential palace. They spoke on condition of anonymity because they were not authorized to brief media.
The crisis began last week during the funeral of a separatist leader killed in a Houthi rocket attack who was laid to rest by supporters in a cemetery near the presidential palace. Supporters attacked the palace, and Hani Bin Braik, a separatist leader and former Cabinet minister, called for the overthrow of the government.

The United Arab Emirates and its allies view President Abed Rabbo Mansour Hadi’s government as being too close to the Muslim Brotherhood, a regional Islamist movement that the Gulf monarchies view as a threat.

Bin Braik tweeted Sunday that the Southern Transitional Council would not “negotiate under duress.” He said his group accepts Hadi as president and is committed to the coalition but wants his Cabinet replaced. The government has said it will not negotiate with the separatists until they hand over all the military positions they seized.

The southern separatists advocate secession and the division of Yemen into two countries, in the north and south, as it was during much of the Cold War before unifying in 1994.

Interior Minister Ahmed al-Maisar acknowledged that the government forces had been defeated, and criticized Saudi Arabia and Hadi for remaining silent during the four days of fighting. He spoke in a video released Sunday but filmed a day earlier in Aden as he awaited evacuation to Saudi Arabia, where Hadi has been based for five years. He accused the UAE-backed separatists of looting government properties and said over 400 vehicles supplied by the UAE had been deployed in Aden.

The U.N. Office for the Coordination of Humanitarian Affairs said in a statement Sunday that preliminary reports indicate as many as 40 people have been killed and 260 wounded in Aden since Aug. 8.
Elsewhere in Yemen, the Houthi rebels claimed an airstrike by the Saudi-led coalition killed at least nine people in the northern Hajjah province.
The Houthi-run health ministry said the strike in Mustaba district also wounded at least 18 people.

Flights To India Awaiting Final Approval Special charter flights to Indian destinations are expected soon with the signing of the Transport Bubble between the two countries, a reliable source disclosed to The Times, Kuwait. It is expected... August 05, 2020 0 16353 Category: Information

The Airport Continues Its Commercial Flights According to Alqabas Kuwait International Airport continued to operate commercial flights for the fifth consecutive day, as 14 flights arrived in the country yesterday, while 16 flights departed. A re... August 06, 2020 0 7653 Category: Travel

19 Dead and 127 Injured after Air India flight crashlands in Kozhikode, breaks into two 19 passengers died and 127 were injured, including 15 seriously, when a plane coming from Dubai met with an accident at Karipur airport in Kozhikode, Malappuram Superintendent of Police (SP) said on F... August 07, 2020 0 5940 Category: India

KTTAA chairman criticizes abrupt decision to ban expats from 31 countries without prior notice Under the pandemic situation the decision was taken by Kuwait government to ban travel from 31 countries. Today Mohammad Al-Muthairi, the Chairman of the Board of Directors of the Kuwait Travel and To... August 05, 2020 0 4593 Category: International

3 Stage Plan For Return of Expats - MOI High sources revealed Alqabas  that the return of residents to the country will take place according to 3 successive stages, during which priority will be according to the needs of the state, wit... August 07, 2020 1 4264 Category: Expats

Allow Entry To Non-Kuwaitis From The 31 Banned Countries Who Are Related To A Kuwaiti The General Administration of Civil Aviation issued a circular to airlines operating at Kuwait International Airport allowing non-Kuwaiti passengers who have a relationship with a first-class Kuwaiti ... August 09, 2020 0 3114 Category: Travel

Ministry Of Health Prepared The List Of Expats Who Are Struck Outside The Country Health Ministry is developing a inventory  of its employees, who are stuck outside the country and  are unable to return to Kuwait thanks to restrictions imposed  due to coronavirus pan... August 06, 2020 1 2996 Category: Kuwait

Kuwait – India Agrees To Evacuate 1,000 Indians Per Day Back To India The Indian Government is about to start flights to bring back Indian expats who are willing to come back to India from Kuwait. Regarding this Indian authority had a discussion with the Kuwait counterp... August 06, 2020 0 2889 Category: Travel
Popular Offers