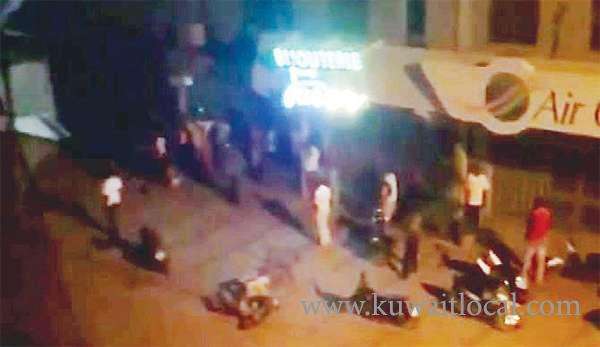 At least 18 people including eight or more foreigners were gunned down in a Turkish restaurant in Burkina Faso, officials said Monday, the latest west African attack to target a spot popular with expats. There has been no claim of responsibility for Sunday night’s attack at the Aziz Istanbul restaurant, which was often packed with foreign nationals who went there to watch football. Foreign minister Alpha Barry told AFP that the “terrorist” attack in the capital Ouagadougou killed seven locals and at least eight foreigners including one Frenchman; one Canadian woman; male victims from Senegal, Niger, Lebanon and Turkey; and two Kuwaiti women.

Separately, the Africa Committee at the Islamic Heritage Revival Society affirmed that renowned preachers of the Grand Mosque Sheikh Dr Waleed Al-Ali and Fahad Al-Husseini with their entourage were not affected by the terrorist attack on the Turkish restaurant in Burkina Faso, explaining that Al-Ali and Al-Husseini were in the country to organize a training course for Imams and clerics, reports Al-Seyassah daily.

Information gathered from officials of the Ministry of Foreign Affairs indicates Al-Ali and Al-Husseini are okay. It also said investigations are ongoing on the incident, pointing out that some bloggers have called on the Ministry of Foreign Affairs to announce the situation of the preachers in the event that left two of the attackers dead alongside 18 other people, including Turkish and French citizens.

MP Waleed Al-Tabtabaei disclosed that Al-Ali and Al-Husseini were in the restaurant where the attack took place. He urged the Ministry of Foreign Affairs to ascertain their condition. The authorities of Burkina Faso affirmed that security operatives launched a counter-assault for several hours which resulted in the death of two terrorists, and the captives were later released.

Three victims remain unidentified, he said. Canada’s Foreign Minister Chrystia Freeland said two Canadians were among the victims. Turkey confirmed that one of its citizens was among the dead, while Paris prosecutors said at least one French national died. Earlier in Ougadougou, Communications Minister Remis Dandjinou said about ten people had been injured, while security forces had killed two assailants in a counter-assault that went on until morning. It was not clear how many gunmen were involved in the attack.

The security operation “has ended” but searches are continuing in buildings in the surrounding neighbourhood, Dandjinou told reporters. He had said earlier that “some people were held” by the assailants and that “some were released”, but gave no further details. “They started shooting on the terrace. We climbed up the stairs and lay on the ground. The attackers came and pointed their guns at us,” said one survivor, interviewed in hospital on national television. “I didn’t understand their language, it might have been Arabic.”

A surgeon said the local hospital was “overwhelmed”. The restaurant is just 200 metres (220 yards) from a hotel and cafe targeted in an assault in January 2016 that left 30 people dead and 71 wounded, many of them foreigners. That attack was claimed by Al- Qaeda in the Islamic Maghreb (AQIM). A government statement described the latest deadly shooting as a “terrorist attack”, while President Roch Marc Christian Kabore condemned it as “a despicable attack that has Ouagadougou in mourning”.

“The fight against terrorism is a long-term struggle,” he said on Twitter. A police officer who spoke to AFP on condition of anonymity cited witnesses as saying at least two assailants arrived on a motorcycle around 9:00 pm (2100 GMT) armed with Kalashnikovs, and opened fire.

A waiter also said he saw “three men arrive on a 4X4 vehicle around 9:30 pm, get off the vehicle and open fire on customers seated on the terrace”. The shooting is the latest in the region targeting spots popular with foreigners and locals alike. Last year’s attack on the Splendid hotel and Cappuccino restaurant, down the road from the Aziz Istanbul, came weeks after jihadists claimed an assault on a hotel in the capital of neighbouring Mali that killed 20 people.

And in March last year 14 civilians and two special forces soldiers were killed when gunmen stormed the Ivory Coast beach resort of Grand-Bassam, an attack also claimed by AQIM. In Burkina Faso, a dozen soldiers were killed in December in an assault on their northern base, and in October there was an attack that killed four troops and two civilians.

An Australian and a Romanian, abducted in Burkina Faso in 2015, are still being held hostage by Qaeda-affiliated Islamists. Sean Smith, senior Africa analyst at risk consultancy Verisk Maplecroft, said the restaurant attack “illustrates that the threat of terrorism now looms over most of the Sahel region”. “While most attacks in Burkina Faso remain confined to the remote northern regions that border Mali, this incident reiterates that Islamists also have the ability to strike at will in the capital.” French President Emmanuel Macron spoke with Kabore, his office said, condemning the “terrorist attack” in the former French colony and stressing the “urgent need” to speed up the launch of a five-country anti-jihadist force in the Sahel. France has its own Barkhane antijihadist operation in the region and has been pushing efforts to set up the 5,000-member force, manned by Chad, Niger, Mali, Burkina Faso and Mauritania, by October.

African Union chief Alpha Conde said the attack “shows the importance of bringing the force into operation” and called on the European Union to find the estimated 400 million euros ($471 million) of extra funding needed. “We must accelerate the G5 launch so that Africans are on the frontline in defending the security of their citizens and that of expatriates,” he told France 24 television. A woman said she was in the restaurant celebrating her brother’s birthday when the shooting started. “I just ran but my brother was left inside,” the woman told Reuters TV as she fl ed the building. For many it was a grim echo of a similar attack on a restaurant and hotel in Ouagadougou in January 2016 in which 30 people were killed.

Al Qaeda in the Islamic Maghreb (AQIM) claimed responsibility. AQIM and related Islamist groups were largely confined to the Sahara desert until they hijacked a rebellion by ethnic Tuareg separatists in Mali in 2012, and then swept south. French forces intervened the following year to prevent them taking Mali’s capital, Bamako, but they have since gradually expanded their reach across the region, launching high-profile attacks in Bamako, Burkina Faso and Ivory Coast. “I am speechless,” Abdoulaye Bance said on a street near the restaurant, where shops and banks were shuttered up and traffic light. “It is not the first time this is happening in our country. There are many victims. There is a feeling of despair.”