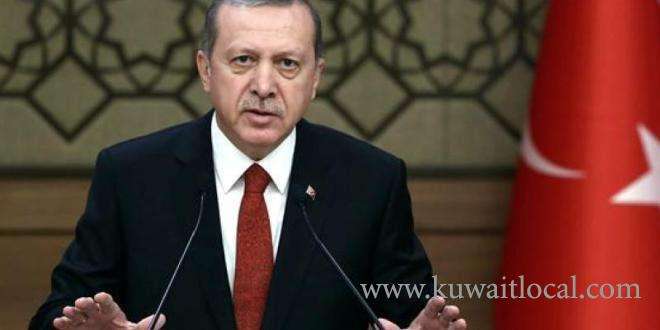 Turkish President Recep Tayyip Erdogan will be visiting Kuwait Sunday where he will be holding official talks with His Highness the Amir Sheikh Sabah Al-Ahmad Al-Jaber Al-Sabah.

Erdogan will begin a tour of the Gulf region as part of his country’s efforts to support a solution to the regional dispute between Qatar and a number GCC countries plus Egypt.

The president will be visiting Saudi Arabia, Kuwait, and Qatar during his tour.

Turkey, as well as other leading nations, lauded His Highness the Amir of Kuwait Sheikh Sabah Al-Ahmad Al-Jaber Al-Sabah’s mediation role in mending fences between the parties involved in the crisis.

Erdogan, on his part, held various talks via phone with leaders in Saudi Arabia, Qatar, Kuwait, and the US to coordinate efforts to end the difficult situation.

Kuwait itself was the focal point of high-level visits by leading world figures such as US Secretary of State Rex Tillerson, UK counterpart Boris Johnson, and others, a fact showing the GCC country’s integral role in mediation efforts.

The three GCC states of Saudi Arabia, the UAE, Bahrain, in addition Egypt cut ties with Qatar last month. The Arab countries also provided a 13-item-demand list to Doha on May 22 to end the diplomatic crisis.

Erdogan heads to the Gulf in an attempt to patch up the rift between Qatar and its neighbours, but the firm Qatari ally may find himself with little room to manoeuvre as a mediator.

In what has become the region’s worst diplomatic crisis in years, the neighbours have since issued more than a dozen demands, telling Qatar to close down Al Jazeera television, curb relations with Iran and shutter a Turkish military base.

Erdogan has said the demands are unlawful and has called for an end to the crisis, citing the need for Muslim solidarity and strong trade ties in the region.

“We will work until the end for the solution of the dispute between the brotherly nations of the region,” he said in comments after prayers on Friday. “Political problems are temporary, whereas economic ties are permanent, and I expect the investors from Gulf countries to choose long-term ties.”

While looking to defend Doha, Erdogan is also wary of alienating its neighbours. He will visit Saudi Arabia, Kuwait and Qatar during the two-day trip that starts on Sunday.

The UAE was Turkey’s seventh-largest export market last year, worth $5.4 billion, while Saudi Arabia was No. 11 and Egypt was No. 13, according to official data. Turkey also wants to sell defence equipment to the Saudis.

“This visit, in a way, would help to demonstrate that despite its positioning as a firm backer of Doha, Turkey still has the ability to dialogue with the other countries at the highest level, primarily Saudi Arabia,” said Sinan Ulgen, a former Turkish diplomat and an analyst at Carnegie Europe.

Nonetheless, Ankara is negotiating from a “handicapped position”, given its vocal support for Qatar, he said.

“In terms of how much Ankara can accomplish and how effective the potential mediation role that Turkey could undertake, the expectations are quite low in that regard.”

Qatar, while not a major trade partner for Turkey, holds strategic importance not least because of the military base established by Ankara after a 2014 agreement. Turkey says as many as 1,000 soldiers could eventually be stationed there.

There are also ideological ties.

Qatar’s neighbours have demanded it end support for groups such as the Muslim Brotherhood, seen by Gulf countries as a threat to their dynastic rule. Erdogan, whose roots are in political Islam, backed a Muslim Brotherhood government in Egypt before it was overthrown in 2013.

“There has been diplomatic traffic before this visit. There have been high-level talks,” a Turkish official told Reuters, speaking on condition of anonymity. “There is a climate in which some concrete steps can be taken.”

In a televised address, the Qatari Amir said his country had supported Kuwait’s mediation efforts from the very beginning, hoping that such efforts would bear fruit.

Sheikh Tamim also spoke highly of the constructive positions of Europe in general and Germany, France and Britain in particular, as well as Russia.

He further appreciated the significant role of Turkey by immediately approving a previously signed strategic cooperation agreement, by providing the Qatari market with all its needs, and by opening Turkish atmosphere and territorial waters.

The Amir of Qatar said that his country is ready for dialogue to resolve the Qatari crisis, but stressed that any solution to the crisis must respect his country’s sovereignty.

“We are open to dialogue to resolve the outstanding problems so long as Qatar’s sovereignty is respected,” Sheikh Tamim said in the televised address.

He admitted that there are currently differences with some Gulf countries regarding Qatar’s foreign policy, while Doha, in turn, disagrees with some member states’ foreign policies, especially regarding the expectations and ambitions of Arab people.

He defended his country by saying that Doha has never tried to impose its views on anyone, emphasizing that divergent views should not negatively affect fraternal ties.

On terrorism, Sheikh Tamim said his country is mercilessly fighting terrorism, citing international recognition in this regard.

However, he underscored that the world should not only fight terrorism, but also problems like poverty, oppression and occupation ought to be addressed.

“It was a true ethical trial. Our people have passed the test with flying colors, and we have held steadfast to our principles and traditions,” he said.

He went on to say that Qataris need to open their economy for investments and to diversify economic sources.

This is the first address by the Amir of Qatar since the June 5 rupturing of ties with Saudi Arabia, Bahrain, the United Arab Emirates and Egypt.

Tillerson said on Friday the United States was satisfied with Qatar’s efforts to implement an agreement aimed at combating terror financing, and urged Arab states to lift a “land blockade” on the tiny Gulf nation.

Tillerson shuttled between Gulf countries last week to convince them to help ease the worst regional dispute in years but left the region without any firm signs the feud would be resolved soon.

The countries made 13 demands of Qatar — including that it shuts down a Turkish military base and the Al Jazeera pan-Arab television network — which Doha has rejected.

While in the Gulf, Tillerson signed an accord with Qatar on terrorism financing in a bid to ease the crisis, but Qatar’s opponents said it fell short of addressing their concerns.

“They have been very aggressive in implementing that agreement, so I think we’re satisfied with the effort they’re putting forth,” Tillerson told reporters just before meeting with Omani Foreign Minister Yusuf bin Alawi bin Abdullah at the State Department.

Tillerson said Qatar was willing to sit with the four countries to discuss their demands, but that it was important to Doha “that the sovereignty and dignity of all five countries be respected in those discussions.”

In a move to counter the four states’ accusations, Qatar has set rules for defining terrorism, freezing funding and terrorism financing and established national terrorism lists.

In one of the first positive signs from the four Arab states since they imposed the sanctions last month, the United Arab Emirates on Friday welcomed Qatar’s decision to amend its anti-terrorism laws.

The four states cut diplomatic, transport and commercial ties with Qatar on June 5, disrupting the import of food and other items and causing foreign banks to scale back business with Qatar.

“I hope the four countries will consider as a sign of good faith lifting this land blockade which is really having the most, I think, negative effects on the Qatari people,” Tillerson said.

beIN back on air

Qatar’s beIN Sports network was broadcasting again Saturday in the United Arab Emirates, according to subscribers to its channels which have been blocked since the start of a Gulf crisis.

“We are again receiving the network of beIN Sports channels, distributed by Du,” one of two telecommunications companies in the Emirates, one customer told AFP.

Etisalat, a UAE-based telecommunications giant, had also reinstated beIN Sports, according to several subscribers to its channels.

Customers were informed of the move in an email from Etisalat.

“We would like to advise that starting July 22, 2017 the beIN package will be available to customers and normal charges will apply,” the message said.

“The provision of the beIN package will be subject to an ongoing review.”

It was unclear what was behind the decision to bring beIN back on air.

beIN, which has the rights to broadcast hugely popular European football leagues, is a subsidiary of the Qatari satellite network Al-Jazeera.

The sports network went offline in the United Arab Emirates last month when a bloc of Arab nations, led by Sunni-ruled Saudi Arabia and including the UAE, cut diplomatic ties with Qatar.

The bloc accused Qatar of backing extremism and fostering ties with their Shiite rival Iran. The gas-rich emirate denies the allegations.

The United Arab Emirates, one of four Arab countries that have imposed sanctions on Qatar, said on Saturday that Doha needed to change its policies before a dialogue could take place.

UAE Minister of State for Foreign Affairs Anwar Gargash said a call for dialogue by Qatar’s emir Sheikh Tamin bin Hamad al-Thani was welcome, but this could only happen after Doha had made changes.

He did not specify these, but the four countries involved have issued more than a dozen demands, telling Qatar to close down Al Jazeera television, curb relations with Iran and shut down a Turkish military base.

“Dialogue is necessary and needed but its backbone has to be revision,” Gargash said on his Twitter account.

He expressed disappointment with a speech by Sheikh Tamim on Friday, the first the emir had given since the start of the crisis.

“I had hoped that the speech of Sheikh Tamim would be an initiative for revision,” Gargash said.