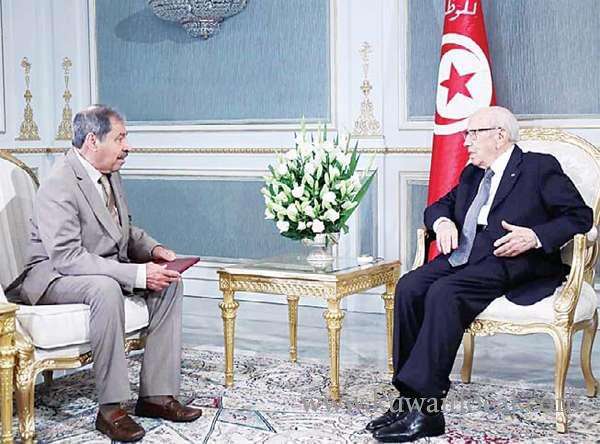 Tunisia’s President Beji Caid Essebsi lauded Kuwait’s tourism and economic investments in his country, the Tunisian Presidency stated on Friday. Kuwait’s achievements in the tourism field have set the standards for successful Arab investments in Tunisia, Essebsi said. The president made his remarks while meeting with a visiting delegation of Kuwaiti businessmen, headed by the President of Kuwaiti-Tunisian cooperation council Fahad Al- Mojil.

The Tunisian leader stressed the importance of the private sector in boosting Tunisian-Kuwaiti economic ties and called for establishing joint project and cooperation programs between the two countries.

The Tunisian President also praised efforts exerted by the Kuwaiti-Tunisian cooperation council in strengthening the distinctive bilateral economic relationship. Meanwhile, the meeting discussed implementing cooperation programs and projects in economic and cultural fields between Tunisia and Kuwait. For his part, Al-Mojil said the initiative of establishing the Kuwaiti-Tunisian cooperation council has been encouraged and supported by His Highness the Amir Sheikh Sabah Al-Ahmad Al-Jaber Al-Sabah.

He stressed the importance of benefiting from the cooperation opportunities provided by Kuwait Fund for Arab Economic Development in Tunisia. Al-Mojil also expressed hope that the delegation meeting with the Tunisian President contributes to permanence of the two countries’ relationship, and foster it in all fields. Furthermore, the Kuwaiti delegation held talks later with Tunisian Prime Minister Youssef Chahed, and discussed with him on ways to boost bilateral cooperation in economic, social, and cultural fields.

Al-Babtain foundation chairman receives Tunisian poet Aboul Qasem Ecaebbi.
Meanwhile, Abdulaziz Saud Al-Babtain Cultural Foundation and Tunisian Culture Ministry have held a ceremony to commemorate Tunisian Poet Aboul- Qacem Echebbi, in the presence of Essebsi, some diplomats and intellectuals. Essebsi launched the event to honor Echebbi for his great contributions to enriching poetry and raising societal awareness, Tunisian presidency said in a statement. The event, which will be organized in the future, will include several cultural activities, seminars and courses in Arabic and prosody, the statement added.

A poetry session was held tonight on the occasion of the event, and some Arab poets and Tunisian culture minister Mohammad Zein Al-Abdeen as well as several Arab ambassadors and intellectuals took part in the session.

The foundation stressed in a speech its commitment to supporting and serving culture movement in the Arab region. It referred that the establishment of an event in the name of Echebbi is a recognition for him, and will be a platform to encourage poetic creativity, and honor intellectuals and creative people.