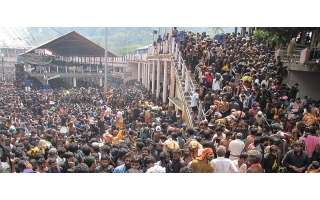 Sabarimala is a Hindu pilgrimage centre located at Periyar Tiger Reserve, in the Western Ghat mountain ranges of Kerala’s Pathanamthitta district. Surrounded by 18 hills, it is the site of one of the largest annual pilgrimages in the world, with an estimated one million devotees visiting every year.

It is believed to be the place where the Hindu deity Ayyappa meditated after killing the evil Mahishi. The temple is situated on a hilltop, at an altitude of 468m above sea level, and is encircled by dense forests.

Temples exist on each of the hills surrounding Sabarimala. While functional and intact temples exist at many places in the surrounding areas like Nilackal, Kalaketi and Karimala, remnants of old temples survive to this day on remaining hills.

Sabarimala pilgrims can be identified easily, as they wear black or blue dress. They do not shave until the completion of the pilgrimage, and smear ‘Vibhuti’ or sandalwood paste on their forehead.

Menstruating girls and women (usually between the ages of 12 and 50) are not allowed to enter the temple, since the story attributed to Ayyappa, who is a celibate, prohibits the entry of women in the menstrual age group.

The temple is open for worship only during the days of Mandalapooja (approximately November 15 to December 26), or “Makar Sankranti” (January 14) and Maha Vishuva Sankranti (April 14), and the first five days of each Malayalam month.