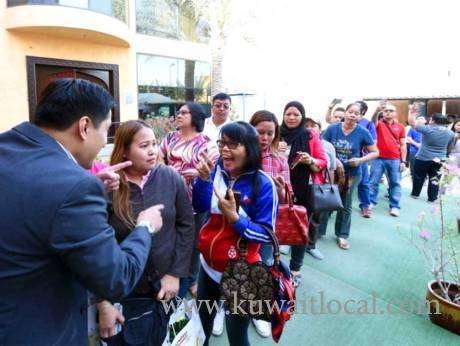 Sandigan Kuwait in cooperation with the Philippine Embassy held a two-day medical mission at the POLO-OWWA.

More than 30 organizations, 370 volunteers including nurses from various hospitals and clinics in Kuwait, 22 doctors including Kuwaiti physicians and other nationalities and more than a hundred donors heeded the call to serve more than 1,000 distressed overseas Filipino workers currently housed at the shelter.

The huge charity event witnessed a gathering of Filipino groups and other nationalities with a sole purpose to help others in need. Total packs of 2,100 goods and medicines were collected and distributed. “I’ve been here in Kuwait for so long and I have never seen or felt this much generosity and unity,” says Mary Ann Abunda of Sandigan Kuwait. “We envisioned a simple medical mission but it has morphed into a magnanimous event of charity and volunteerism thanks to the outpour of love from everyone who participated. We would also wish to thank the Philippine Embassy officials headed by HE Renato Pedro O. Villa and POLO-OWWA officials for their support,” added Abunda.

According to Sandigan, the event wouldn’t be a success without these selfless organizations and institutions and their drive to help others: Sandigan Kuwait Domestic Workers Association, PNA-K-Pinoy Nurses Association, Kuwait- Central Prison Nurses or the JAIL BOYS Kuwait, PANIK — Pinoy Ambulance Nurses in Kuwait, Phil- SOC — Philippine Society of Marketing Specialist in Kuwait, Infinity Event Management and Talents.