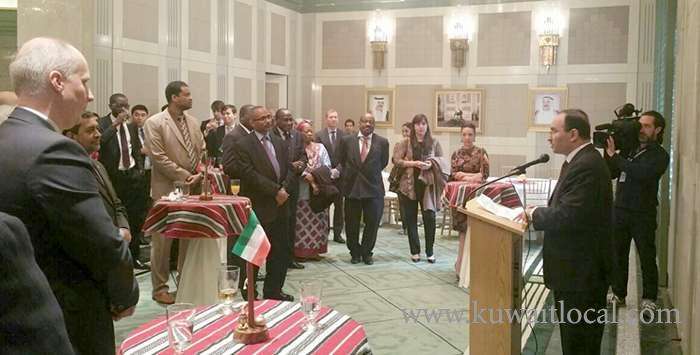 Kuwait Mission to the UN hosted in the heart of Manhattan an event aiming to promote the country's culture and heritage.

The "Taste of Kuwait" event, that took place at the Permanent Mission of Kuwait, welcomed top diplomats and election officers representing countries from all over the globe experiencing food and ambiance.

The halls of the Kuwait Mission were decorated to give a closer vibe of the Middle Eastern country with the tent from the past and the food booths each displaying a certain dish savory and sweet.

The invitees saw a short film that showcases how Kuwait is becoming a Food Capital, and heard a brief speech delivered by Kuwaiti Ambassador to the UN Mansour Al-Otaibi about the country, its history and brief comparison of the before and after oil living.

In his speech, Ambassador Al-Otaibi highlighted the outcome of a number of elements that influenced the culture, primarily the geographic location of Kuwait, the climate and the surrounding environment, as well as the culture of its inhabitants. Speaking to Kuwait News Agency (KUNA), the Permanent Representative to the UN Ambassador Al-Otaibi said the event that took place comes as part of a series of events they have organized within their Security Council campaign for a non-permanent seat for the period 2018-19.

"Throughout these events, we aim to promote the culture and heritage of the State of Kuwait, as well as the customs and traditions of its people," he added. Kuwait has been campaigning for some time now, promising in many occasions to continue the country's support to the UN so it can play an active role in helping many countries overcome crises and provide decent live for their people. UN Security Council elections will be held on June 2, 2017.