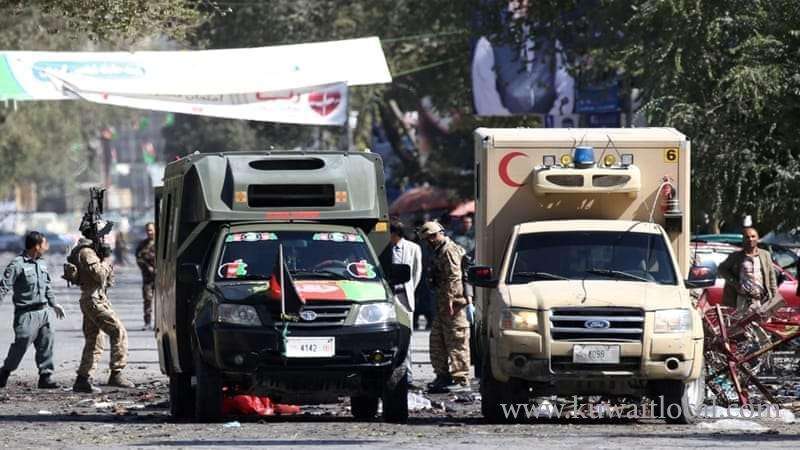 At least 48 people have been killed and dozens more wounded in two separate attacks in Afghanistan - one at a campaign rally by President Ashraf Ghani and the other in the capital, Kabul.

In the first blast on Tuesday, a suicide bomber on a motorcycle targeted the rally by Ghani, who is reported to be safe and unharmed.

The suicide bomber rammed his explosives-laden motorcycle into the entrance of the venue hosting Ghani's rally.

At least 26 people were killed and more than 40 wounded in the attack, which was claimed by the Taliban, in Charikar, the capital of Parwan province, north of Kabul.

Nasrat Rahimi, spokesman for the Ministry of Interior, said the death toll of 26 included four soldiers.

Abdul Qasim Sangin, head of Parwan hospital, said children were among those killed and there were fears the number of victims could rise.

The president was present at the time of the explosion but is safe and unharmed, his campaign spokesman, Hamed Aziz, was quoted as saying by The Associated Press news agency.

In a separate incident just hours later, another explosion went off near Kabul's Green Zone, where the defence ministry, US embassy and NATO headquarters are located. Taliban also claimed responsibility for the blast in the capital, saying it was also a suicide attack.

Across Afghanistan, attacks have continued as the country prepares for a presidential election later this month.

The Taliban has warned that its fighters will intensify their campaign against the Afghan government and foreign forces to dissuade people from voting in the September 28 vote, when Ghani will bid for a second five-year term.

Last week, US President Donald Trump abruptly ended talks with the Taliban seeking to reach a deal on the withdrawal of thousands of US troops from Afghanistan in exchange for security guarantees from the group.

The talks, which did not include the Afghan government, were intended as a prelude to wider peace negotiations.

On Tuesday, a Taliban spokesman confirmed the group held talks with Iranian officials, a move confirmed by Iran's Foreign Ministry as well.

"In the framework of Iran's comprehensive consultations with all parties in Afghanistan, a Taliban political delegation visited our country recently to discuss the latest developments in Afghanistan with...Iranian officials," Foreign Ministry spokesman Abbas Mousavi was quoted as saying by state media.

Suhail Shaheeh, the Taliban spokesman, said on Twitter that "a four-member delegation travelled to Iran and met with senior officials of the foreign ministry on September 9".

Al Jazeera's Rob McBride, reporting from Kabul, said "everybody has been expecting since the peace talks broke down and the government reaffirmed its commitment to go ahead with this election, amid threats from the Taliban, that there was going to be an uptick in violence".

"The government seems determined to go through with this election and has committed more than 70,000 security forces across the country to ensure that it will go ahead," he added.

"But by its own admission, instead of the 7,000 polling stations that were opened five years ago during the last election, the number now is probably going to be around 5,000."