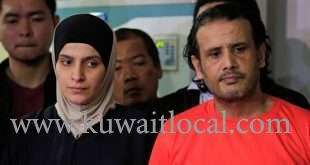 A suspected member of the Islamic State group has confessed to plotting attacks on targets in Kuwait including the US military and a Shiite religious hall, local media reported Wednesday. Judicial sources said Hussein Al-Dhufairi, arrested with his wife in the Philippines last month, confessed to planning suicide attacks on a US military convoy and a Shiite prayer hall.

Kuwait’s Arifjan Base houses several thousand US troops and serves as a military transit point to Iraq and Afghanistan. Home to a small Shiite minority, Kuwait was the site of a suicide attack linked to the Islamic State (IS) group back in June 2015. A Saudi suicide bomber killed 26 worshippers in a Shiite mosque, the worst such attack in Kuwait’s history.

Al-Dhufairi was deported earlier in April to Kuwait where he is now set to stand trial on charges of belonging to a banned organisation and plotting attacks, Al-Rai said. He had been arrested in Manila along with his wife, whom he married after her high-ranking IS commander husband was killed in Syria.

Authorities in Kuwait have also arrested four of Al-Dhufairi’s relatives, including his brother and nephew, in connection with the planned attacks, Al-Rai said. The five suspects told public prosecutors that suicide bombers had been recruited from outside of Kuwait to carry out the attacks, according to Al-Rai.

They also said there had been tentative plans to target a church in Kuwait during a visit this week by Coptic Pope Tawadros II. Kuwaiti courts have handed down multiple convictions on charges of IS membership or financing.

Some of the defendants have been found guilty of fighting with the jihadists in Iraq or Syria. All have received lengthy jail sentences. A lower court in December sentenced a Filipina to 10 years in jail after convicting her of joining the jihadist group and plotting attacks.