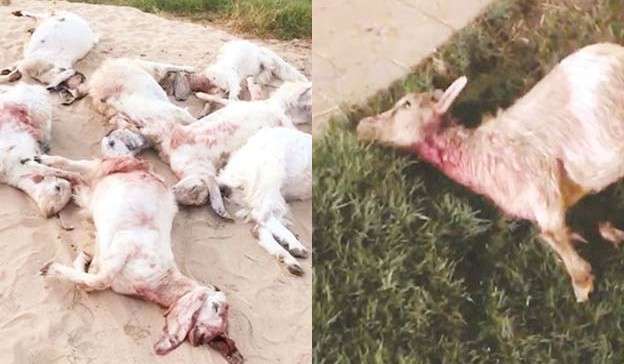 The livestock barn on Rashid Mahdi Al-Azmi farm in the Al-Wafra farms area was subjected to a fierce attack by stray dogs, reports Al- Seyassah daily. The daily added, the dogs have killed 11 rare breed goats and have also attacked seven expensive ‘white goats’. According to the owner of the farm, the dogs stormed the barn at night, and ripped the bodies of the goats.

He put the losses at about 3,000 dinars. He said the number of stray dogs has increased dramatically in recent times, and this will not only harm the livestock, but the day is not far when they will attack people and visitors to the farms. Al-Azmi added he is not the only one who is the victim of attacks from stray dogs.

There are a number of other farmers and breeders in Wafra, Abdali and Sulaibiya who have lost livestock and birds in big numbers. He said the phenomenon is not limited to farms only, but also some residential areas. The need of the hour is to get rid of these stray dogs and the concerned authorities must act now before it is too late.

Al-Azmi feels there has been no response from the concerned authorities in spite of the constant complaints filed by the victims. He said that the concerned officials in the State must be aware and know that livestock is a major part of the country’s food security, and if this part is exposed to problems and challenges that impede or weaken its productivity, this will affect self-sufficiency and threaten the food security.

The blood of the injured and dead goats in the Rashid Al-Azmi farm has barely dried up, when the next night the Al-Faqai’i farm, on the street opposite Al-Azmi farm, was subjected to a similar attack by stray dogs, said Al-Anba daily. It is believed that it is the same group of four fierce dogs that had run havoc at the Al-Azmi farm. Al-Faqi’i says the dogs entered the farm and attacked the goats there and when pursued they fl ed and took refuge in an abandoned farmland.