<![endif]-->
Advanced Search
Speaker Will Meet Other Lawmakers To Brief Them On An Important Message
Category: Kuwait 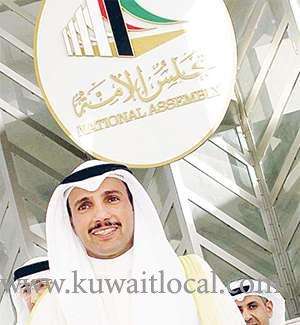 National Assembly Speaker Marzouq Al-Ghanim will meet with other Kuwaiti lawmakers on Tuesday to brief them on an “important message” from His Highness the Amir Sheikh Sabah Al-Ahmad Al-Jaber Al-Sabah. “Regional developments are moving in a very fast pace,” Al-Ghanim told reporters on Sunday.

“These exceptional dangerous circumstances should be handled in a wise and astute manner.” He called on lawmakers to “focus on priorities” as he alluded to “real dangers” on the regional scale. These issues should be delivered to the Kuwaiti people in “complete transparency”, he added. “The primary weapon to face these challenges is by fortifying our internal front with actions, not only words, by getting behind the political leadership in the form of His Highness the Amir,” he said.

Separately, Al-Ghanim condemned and rejected the intercepted missile attack on Saudi Arabia’s capital, Riyadh, and said he stood firmly behind the Kingdom. The parliamentary Finance and Economic Affairs Committee on Sunday decided to postpone taking decisions on three proposals concerning the population structure, Kuwait Chamber of Commerce and Industry (KCCI), and the Silk City.

Committee Chairman MP Salah Khorshid said they made the decision in view of the absence of the government, clarifying that the discussion of these proposals is just a formality because the technical aspects have been tackled in anticipation of the formation of the government and invitation of the competent minister to complete the debate in order to take the appropriate decision He said the committee talked about the proposals to amend the demographic structure which is important in controlling the security and economic situation in the country. He disclosed these proposals include determining the percentage of each community residing in the country, affirming that some experts will be invited to discuss the issue. Meanwhile, the parliamentary Health Affairs Committee on Sunday set its priorities for the next stage, while welcoming new proposals that the Parliament considers a priority.

Committee Chairman MP Humoud Al-Khudair said the priorities include the proposed amendment of the law on health insurance for retirees by adding new clauses to expand the coverage to incorporate their wives, children with special needs and others. Other priorities are as follows: protecting the right of patients to have accommodation, treatment and care; establishment of medical cities and hospitals in all governorates; and the Mental Health law which was referred to the 2015 Parliament but it has not been implemented until now.

Al-Khudair drew attention to the formation of a subcommittee with two members — one will serve as chairman or rapporteur — to discuss items in the agenda without taking a decision or voting which will be postponed until the original committee meetings. He also affirmed that the committee welcomes suggestions in the interest of the country and its citizens.

In another development, MP Rakan Al-Nisf stressed the current situation in the region requires HH the Prime Minister Sheikh Jaber Mubarak Al-Hamad Al-Sabah to form a government with the ability to face internal and external challenges. He asserted that cooperation with the government starts from its formation because it is unacceptable to retain ministers whose performance was criticized by MPs and citizens while those who succeeded in developing their ministries and improving the performance of employees were dismissed. He pointed out the premier has enough time to form his government and there is no excuse for rushing the selection of minister as practiced in previous governments. He said the selection must be based on efficiency, good reputation and excellent performance.