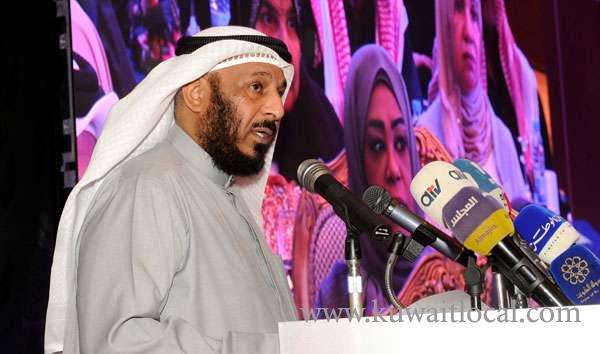 Kuwait’s Minister of Social Affairs Saad Al-Kharaz confirmed on Tuesday his commitment to the rules and regulations and his eagerness to cooperate with the National Assembly to serve Kuwait’s interests.

Al-Kharaz told reporters at Parliament that the constitutional oath that he took is a devotion to the country. He thanked His Highness the Amir Sheikh Sabah Al-Ahmad Al- Jaber Al-Sabah and His Highness the Prime Minister Sheikh Jaber Al-Mubarak Al-Hamad Al-Sabah.
Al-Kharaz appreciated the achievements made by Minister of Social Affairs and Minister of State for Economic Affairs Hind Al-Sabeeh and hoped he will continue to develop the ministry.

The Minister of Social Affairs and three other new ministers took an oath before His Highness the Amir on the occasion of their appointment in their new posts and before the Parliament to proceed as members as prescribed in Article 91 of the Constitution.

Praised Meanwhile, Kuwaiti Minister of Commerce and Industry and Minister of State for Services Affairs Khalid Al-Roudhan praised on Tuesday the precious trust granted to him by His Highness the Amir Sheikh Sabah Al-Ahmad Al-Jaber Al-Sabah, and His Highness Prime Minister Sheikh Jaber Al-Mubarak Al-Hamad Al-Sabah, for having been given the portfolio of service affairs.

Speaking to KUNA, he vowed that he would exert further honest and sincere efforts in serving Kuwait and its people. He hoped that he would meet the aspirations of the political leadership, stressing that he would work hard to put in place His Highness the Amir Sheikh Sabah Al-Ahamd Al-Jaber Al-Saba’s vision for turning Kuwait into a financial and commercial center.
Moreover,the last decision issued by the Cabinet to impose harsher penalties on those proven to have violated the national employment support regulations is linked with the circumvention of the law, which was uncovered through investigations and cost the State millions of Kuwaiti dinars, reports Al- Qabas daily quoting sources. Sources revealed most of the national employment support irregularities were uncovered in the last few years, after the application of a mechanism linking all governmental bodies.

Sources enumerated the violations as follows:

Submission of invalid social status data,
Working in and outside the country without informing the Manpower and Government Restructuring Program (MGRP),
Getting a license or permit to engage in a bogus profession or commercial activity,
Rejecting offers to work in governmental or private sector twice,
Studying abroad during the work period without informing the concerned bodies.