<![endif]-->
Advanced Search
Silverman Denied Allegation Of Contradictions In The US Statements On The Gulf Crisis
Category: Kuwait 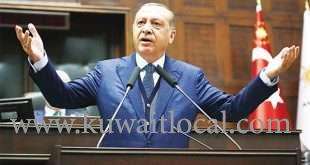 US Ambassador to Kuwait Lawrence Silverman denied allegation of contradictions in the US statements on the Gulf crisis, insisting on the clear stance taken by his country to find a lasting solution to the Gulf crisis as soon as possible especially since it is affecting the unity of the region, reports Al-Qabas daily.

Speaking to reporters on the sideline of an event held at the Moroccan Embassy, the ambassador affirmed that fighting terrorism and eradicating all financial sources of terrorism is the top priority of the USA and various other countries in the world.

When asked about the joint meeting of the foreign ministers of the top four anti-terrorism countries held in Manama as well as the latest developments in the Qatari file, the ambassador clarified that his country attaches great importance to the GCC unity, stressing the keenness of USA, as confirmed by the US Secretary of State for Foreign Affairs Rex Tillerson, to solve this crisis as soon as possible.

Ambassador Silverman revealed his intention to meet 12 Kuwaiti students who will study in schools in the USA for one year where they will stay with American families, adding that this reflects the depth of the bilateral relations between the two countries.

Regarding issuance of visas to the USA to students, he explained that the embassy has allocated the days from Aug 13 to Aug 17 for receiving applications for student visa. He called on all students who are desiring to study in USA to quickly apply, as there are nearly 1,700 students who are intending to study in America this year. He denied that there are any changes in the visa procedures for Kuwaiti students.