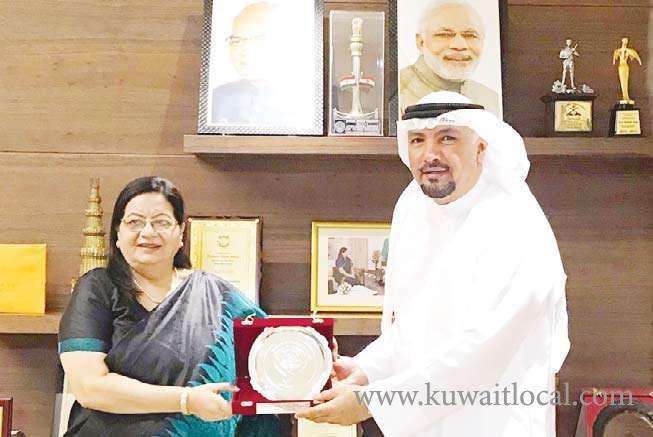 Sheikh Sabah Al-Ahmad Library in New Delhi is a cultural beacon of knowledge par excellent, an Indian academician said on Wednesday. Vice-Chancellor of the prestigious Indian University Jamia Millia Islamia, Najma Akhtar said during an interaction with Kuwait Ambassador to India Jassem Al-Najem that the library is very rich with Arabic books references and has turned into a major source of information for the researchers.

Najma Akhtar, who is serving as the first woman Vice-Chancellor of the university ever since its establishment in 1920, said that there is a number of students and researchers specializing on Arab culture, Islamic history from various Indian regions are regularly visiting the library, opened in 2011 at the Indo- Arab Cultural Center at the university.

She added that the library is yet another landmark in the history of strong and long-standing relations between the two friendly countries and hailed the interest of Kuwait Amir His Highness Sheikh Sabah Al-Ahmad Al-Jaber Al-Sabah in the field of education and knowledge production.

She pointed out that the electronic linking of the library with distinctive libraries in Kuwait such as the National Library and the Library of Kuwait University will provide enhanced opportunity for students and academicians in India to find more references and resources. The Jamia VC also praised Kuwait’s humanitarian role in various international forums and the role of His Highness the Amir in resolving various issues around the globe.

On his part, Ambassador Al-Najem said that India was the cradle of human civilization and bonds with Kuwait in several areas including academic, cultural and scientific are strong. Kuwait is always committed to harnessing all efforts to participate in academic and cultural activities around the world and activate bilateral agreements signed with friendly countries in these areas for mutual benefit, ambassador Al-Najem stressed.

Scholarships, faculty and student exchange programs between universities and scientific centers should be tapped for the benefit of the people in both the countries, he added. Under the guidance of the humanitarian leader His Highness the Amir Sheikh Sabah Al-Ahmad Al- Jaber Al-Sabah, Kuwait is striving to spread knowledge across the whole world and bring peoples of different cultures together, the ambassador concluded.