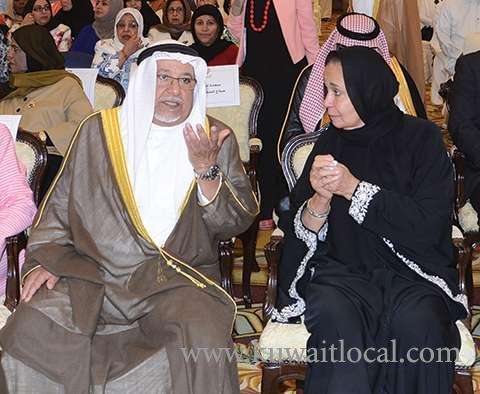 Deputy Minister of Amiri Diwan Affairs Sheikh Ali Al-Jarrah Al-Sabah stressed on the important role played by Kuwaiti women in the country’s development.“Kuwaiti women have outstanding achievements in different fields and are worthy of having their full rights on all levels”, said Sheikh Ali on the sidelines of a ceremony to celebrate Kuwait’s Women Day, held by the Cabinet’s Women Affairs Committee on Monday, under the patronage of His Highness the Amir Sheikh Sabah Al-Ahmad Al-Jaber Al-Sabah.

On her part, the committee’s Chairwoman Sheikha Latifa Al-Fahad Al-Salem Al-Sabah thanked His Highness the Amir for patronizing the event, also noting His Highness’ efforts to grant women their political rights in 2005.

Sheikha Latifa said that Kuwaiti women were appointed as ministers and occupied seats at the National Assembly for the first time during the era of His Highness the Amir, who believed in their potentials.

Meanwhile, ambassadors of Egypt, Lebanon, Djibouti and Algeria attending the event have all agreed on the prominent role played by Kuwaiti women in the fields of economy, culture, journalism and politics, as well as their successful participation in vital international events.

At the onset of the ceremony, some verses of the Holy Quran were recited, and a documentary of Kuwaiti women’s role was then shown. Addressing the event, Sheikha Latifa thanked His Highness the Amir for patronizing the ceremony of the Kuwaiti Women’s Day. She recalled that 11 years ago an Amiri decree was issued giving Kuwaiti women their full political rights thanks to His Highness the Amir’s blessed efforts out of his belief in women’s significant role, position and societal value.

Kuwaiti women have been appointed as cabinet ministers and elected members of parliament during his era, she added. She believed that the Women’s Day is a proof of promising future for the nation where women would be an effective element and a key partner to development, progress and welfare. She also thanked official and nonofficial agencies and civil society organizations as well as sincere national figures for supporting women in their long struggle to get their full rights.

Sheikha Latifa took this opportunity to highly commend all Kuwaiti women who shouldered responsibility, struggled and sacrificed for the sake of the nation. Afterwards, Mrs Najea Saif Al-Mansouri said in a speech on behalf of Chairwoman of the UAE General Women’s Union Fatma Bint Mubarak that the UAE is keen to share Kuwaiti women in this celebration, hailing their achievements.

She added that Kuwaiti women have played a key role in different fields, and held senior posts thanks to the support of Kuwait’s wise leadership.