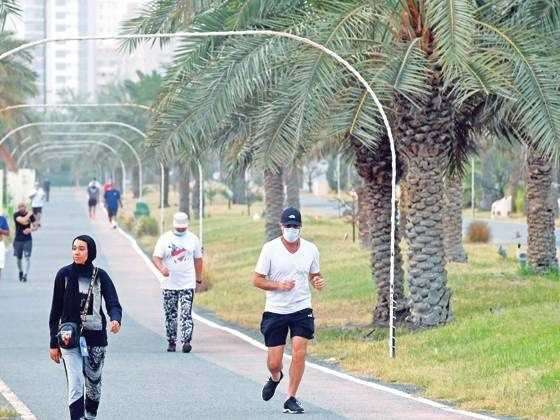 The partial curfew did not prevent some citizens from going out at night inside residential areas to walk and use bicycles to enjoy the good weather, Al Qabas reported.

Dozens of citizens in many areas took a stroll down the walkways in the evening, while some preferred to run around the areas around their homes with children, while entire families were noticed on some paths.

Citizens called on the Council of Ministers to allow two hours for walking at night during the curfew month, similar to what was allowed in the previous curfew. Many citizens stated that they were busy at work and leave late to endure traffic jams, which made it necessary for some to relax for some time in the evening.

However, a security official told Al-Qabas daily: The Ministry of Interior (MoI) is committed to implementing the cabinet’s decision to the fullest, and there are no exceptions except in the context of granting curfew permits through the MoI’s barcode system, according to the categories allowed to leave homes.

The source pointed out that walking inside residential areas or using bicycles and other things is not permitted, indicating that members of the public are only allowed to go outside their homes to perform prayers, in nearby mosques, after which worshipers return to their homes.

The source indicated that the authorities spread across the areas to ensure adherence to the curfew cannot cover every street, but the security points cover the main streets and departments to check permits and arrest violators.