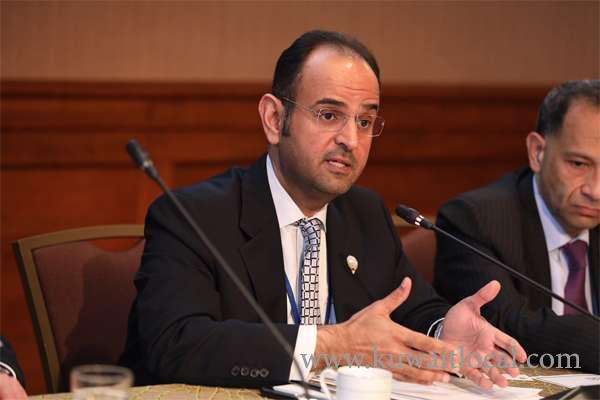 Minister of Finance Dr Nayef Al-Hajraf said there is no alternative to increasing liquidity in the public reserve by issuing sovereign bonds through renewal of the sovereign bond issuance law, which is called the government’s authorization law to hold public loans in cooperation with the legislative Authority, pending the implementation of the economic and financial reforms contained in the National Economic and Financial Sustainability Program.

In response to a question from MP Abdulwahab Al-Babtain, Al-Hajraf stressed withdrawing money from the general reserve to cover the deficit in the general budget is done according to the law. He pointed to the risk of resorting to withdraw from the general reserve fund which he called a possibility of exhausting the reserve balance by 2020 since the price of crude oil continues to decline.

He pointed out that the cash available in the State’s General Reserve Fund has declined significantly over the last four years arising from the need to cover the deficit in the final account due to the decline in international oil prices, which is the main source of revenue for the general budget. He added, “Preserving the liquidity of the general reserve is very important because reserves are the safety valve for public finances in the face of any unforeseen emergency needs.

Further withdrawals from the general reserve affect the solvency of the state and its sovereign credit rating. He stated that in the short term, the government sees that there is no alternative to increasing liquidity in the general reserve through the issuance of sovereign bonds which is done in cooperation with the legislative authority, pending the implementation of the economic and financial reforms in the National Economic and Financial Sustainability Program.

Al-Hajraf explained the bill presented to the National Assembly by issuing sovereign bonds does not mean that the State of Kuwait is in the process of borrowing 25 billion dinars.

This amount constitutes only the ceiling, that is, the maximum allowed to issue sovereign bonds when necessary as it is the source of financing, enabling the state, if necessary, to resorting to meet the budget deficit and to provide other financial needs over the next 20 years. He pointed out that the Council of Ministers has been keen through the Ministry of Finance and other concerned authorities, and since 2014 (the beginning of the actual deficit of the budget), to launch and activate a number of initiatives aimed at rationalizing and controlling public spending.

The Ministry, he said, is also keen on developing the mechanisms of preparing the general budget, in the framework of medium term budget covering three years with a view to reducing and minimizing the impact of fluctuations in oil prices on public revenues in the implementation of Decision No. 332 of the Cabinet meeting No. 2017/9 held on 2017/3/1 on the mandate given to the Ministry of Finance to set a ceiling for expenditure in the General Budget and Medium Term Planning.

He added that the National Sustainability Program, presented by the government to the National Assembly at its meeting as well as the current medium-term development plan, aims to diversify public revenues by diversifying sources of non-oil income through the implementation of economic and financial reform initiatives.

Meanwhile, the Budgets and Final Account Committee of the National Assembly will discuss on Sunday morning a bill linking the budget of ministries and government departments for fiscal year 2018-2019 with the current expenditure.

The meeting will be attended by representatives of the Ministry of Finance, the Financial Controllers Agency, the Audit Bureau, the Civil Service Commission and the Government Performance Monitoring Agency.

Moreover, the Replacement and the Employment Crisis Committee in the National Assembly will discuss two requests submitted by some MPs on the issue of unemployment in the country to clarify the government’s policy in this regard.