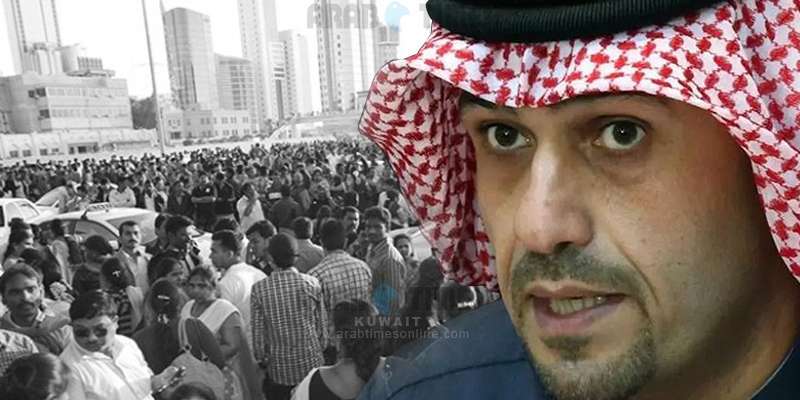 The Deputy Prime Minister, Minister of Interior and Minister of State for Cabinet Affairs Anas Al-Saleh is serious about living up to his ‘three-phase’ plan and his promise to rid the country of visa traders and violators of residence law who are still living in the country, reports Al-Seyassah/Arab Times daily.

He was quoted as saying the first phase ended successfully with the departure of about 26,400 who left the country without paying fines.

A reliable source told the daily, the second stage will begin after life in the country returns to normal completely as announced by the Council of Ministers, and includes “granting a new one-month deadline for violators of residence to surrender voluntarily and leave the country without paying fines”.

The sources pointed out there are still more than 90,000 residence law violators and the Interior Ministry expects a large number of them to benefit from what it called the second amnesty to leave the country, especially since the coronavirus pandemic has had a huge effect on the economic situation and financial situation of many of the citizens and residents.

The source emphasized the third and final stage of the plan will start work immediately after the end of the ‘second’ phase which will include a careful count of the numbers and nationalities of the remaining violators, their whereabouts and the organization of extensive security campaigns to pursue them.

The source added, the Minister of the Interior Anas Al-Saleh, has asked the concerned senior official to prepare lists of the violators who have not taken advantage of the amnesty and to pursue their sponsors. He explained this stage will start before the end of the year and aims at removing more than 50 percent of the violators by blocking the names and transactions of sponsors, indicating that at the conclusion of the three stages of the plan it will be strictly forbidden to transfer the violator from one company to another and the offender will have to leave the country permanently.

The permanent committee formed to implement the national strategy to prevent trafficking in humans and smuggling of migrants is currently preparing a comprehensive response to the annual report issued by the US State Department Office of Monitoring and Combating Trafficking in Persons (OMCTP), which accused Kuwait of not meeting the minimum standards of eliminating this phenomenon, reports Al-Jarida quoting knowledgeable sources.

According to sources at the Public Authority for Manpower (PAM), the committee that includes in its membership representatives from most of the relevant ministries, authorities, and government institutions, such as the ministries of Foreign Affairs, Justice, and Interior, in addition to PAM, are coordinating with each other to refute the allegations and the inaccuracies contained in the report.

The committee stressed the response will focus on highlighting the strenuous efforts made by the state to confront this abhorrent crime of human trafficking, and to get rid of fake companies that have flooded the market with marginal and bulk employment.

The sources pointed that efforts so far exerted have resulted in the referral of dozens of companies that are suspected of visa trading to the Public Prosecution or the General Department of Investigations at the Ministry of Interior; their files have been blacklisted and some workers have been arrested for violating the residence law.

The sources added that the matter did not end here, but even some senior officials of PAM who were suspected of wrongdoing have been referred to the Prosecution and suspended from work until the investigations are completed.

They were suspended after their names popped up during interrogations in the case related to migrant workers. Regarding protection of migrant workers, the sources said PAM spares no efforts to provide all forms of protection in the private and domestic sectors, as well as to those registered with government contracting companies.

PAM’s emergency and crisis management team, according to sources, has started the process of paying all financial dues for employees of troubled companies, and is supervising the transfer of workers wishing to leave for their home countries after ensuring they have received their full entitlements.