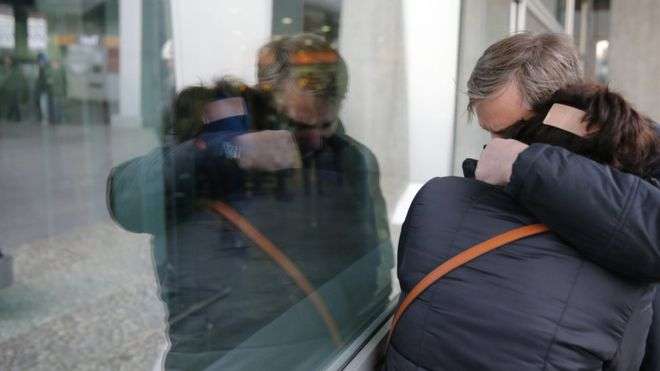 A Russian airliner has crashed in central Sinai with more than 200 people on board, the office of Egypt's prime minister has confirmed. The Airbus A-321 had just left the Red Sea resort of Sharm el-Sheikh, bound for the Russian city of St Petersburg.

Wreckage was found in the Hasana area and bodies removed, along with the plane's "black box". An official described a "tragic scene". Flight KGL9268 disappeared when travelling at 9,500m (31,000ft).

Egyptian officials said all the passengers were Russian. Russian President Vladimir Putin has ordered an official investigation into the crash, and for rescue teams to be sent to the crash site.

A commission headed by Transport Minister Maksim Sokolov is to leave for Egypt on Saturday afternoon. A criminal case has also been opened against the airline, Kogalymavia, for "violation of rules of flight and preparation for them", Russia's Ria news agency reported.

The airline, based in western Siberia, operates under the name Metrojet. Russian authorities say it was carrying 217 passengers, 17 of them children aged between 2 and 17, and seven crew. Most were tourists.

A centre to help relatives of the passengers has been set up at Pulkovo airport, Tass news agency quoted St Petersburg city officials as saying. 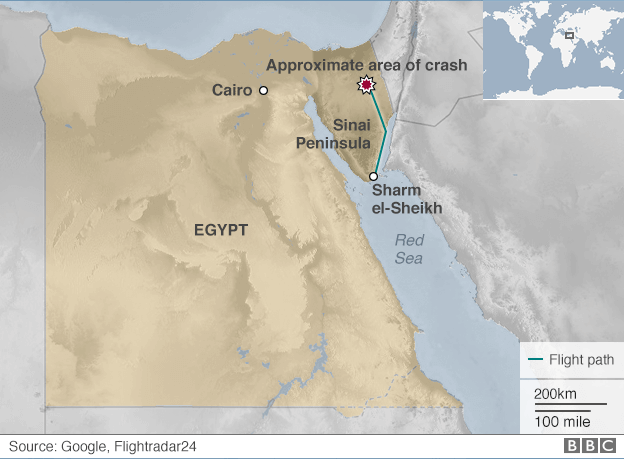 Initially there were conflicting reports about the fate of the plane, some suggesting it had disappeared over Cyprus.

The plane was on its way to St Petersburg when it crashed: 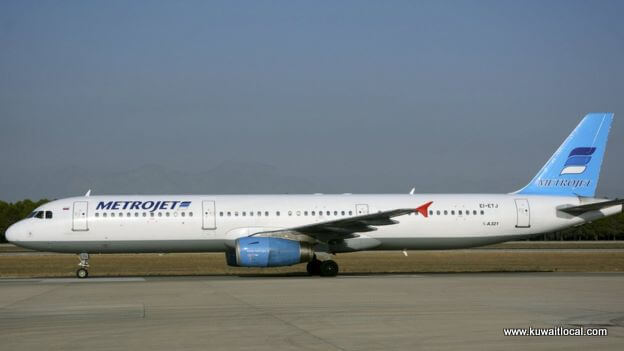 But the office of Egyptian Prime Minister Sharif Ismail confirmed in a statement that a "Russian civilian plane... crashed in the central Sinai". It added that Mr Ismail had formed a crisis committee to deal with the crash.

Media reports say at least 50 ambulances have been sent to the scene. Access to the area is strictly controlled by the military and the terrain is difficult, correspondents say.

One official told Reuters news agency that at least 100 bodies had been found. "I now see a tragic scene," the official said. "A lot of dead on the ground and many died whilst strapped to their seats."

The plane split in two, with one part burning up and the other crashing into a rock, he added. The Russian aviation authority Rosaviatsiya said in a statement that flight KGL9268 left Sharm el-Sheikh at 06:51 Moscow time (03:51 GMT) and had been due into St Petersburg's Pulkovo airport at 12:10.

The authority added that the aircraft failed to make scheduled contact with Cyprus air traffic control 23 minutes after take-off and disappeared from the radar. Egypt's civilian aviation ministry said the plane had been at an altitude of 9,500m (31,000ft) when it disappeared.

Live flight tracking service Flight Radar 24's Mikail Robertson confirmed the altitude. He told the BBC that the plane started to drop very fast, losing 1,500m in one minute before coverage was lost.

Aviation official Ayman al-Mukadem said the pilot had reported technical difficulties before the plane went missing, the Associated Press reported. The BBC's Orla Guerin in Cairo says it is likely there will be speculation about militant involvement in the incident - Sinai has an active militant network, with local Jihadis who have allied themselves to so-called Islamic State.

But the aircraft's altitude suggests that it could not have been struck from the ground, she adds. Local weather observations in the vicinity of the rescue scene suggest relatively benign conditions.

Flights To India Awaiting Final Approval Special charter flights to Indian destinations are expected soon with the signing of the Transport Bubble between the two countries, a reliable source disclosed to The Times, Kuwait. It is expected... August 05, 2020 0 16286 Category: Information

The Airport Continues Its Commercial Flights According to Alqabas Kuwait International Airport continued to operate commercial flights for the fifth consecutive day, as 14 flights arrived in the country yesterday, while 16 flights departed. A re... August 06, 2020 0 7583 Category: Travel

19 Dead and 127 Injured after Air India flight crashlands in Kozhikode, breaks into two 19 passengers died and 127 were injured, including 15 seriously, when a plane coming from Dubai met with an accident at Karipur airport in Kozhikode, Malappuram Superintendent of Police (SP) said on F... August 07, 2020 0 5828 Category: India

KTTAA chairman criticizes abrupt decision to ban expats from 31 countries without prior notice Under the pandemic situation the decision was taken by Kuwait government to ban travel from 31 countries. Today Mohammad Al-Muthairi, the Chairman of the Board of Directors of the Kuwait Travel and To... August 05, 2020 0 4528 Category: International

3 Stage Plan For Return of Expats - MOI High sources revealed Alqabas  that the return of residents to the country will take place according to 3 successive stages, during which priority will be according to the needs of the state, wit... August 07, 2020 1 4191 Category: Expats

Ministry Of Health Prepared The List Of Expats Who Are Struck Outside The Country Health Ministry is developing a inventory  of its employees, who are stuck outside the country and  are unable to return to Kuwait thanks to restrictions imposed  due to coronavirus pan... August 06, 2020 1 2957 Category: Kuwait