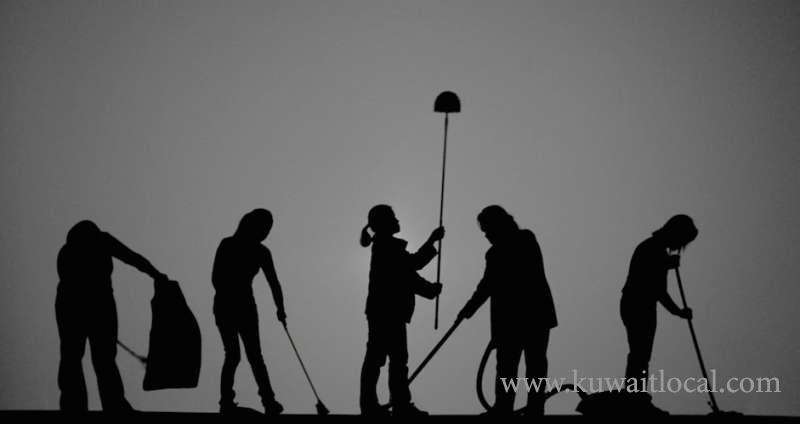 Widespread advertisements in electronic applications explicitly saying “Domestic Workers for Sale” are among the individual practices rearing heads to distort and block Kuwait’s efforts in fighting human trafficking in the face of confident steps taken to preserve its white dress in this regard, reports Al-Rai daily.

Human rights groups in Kuwait have sounded the alarm, cautioning against complacency with declarations of this nature that waste the effort to preserve Kuwait’s international image in terms of human rights. While noting that Kuwait did not ratify the Migrant Workers Convention, its officials considered the imbalance was not due to the absence of laws but leniency in its application.

In this context, Khaled Al-Humaidi President of Kuwait Society for Human Rights affirmed that “sale and purchase of workers and offering them as a commodity via social media is considered trafficking in humans with full integrated elements and cannot be seen in any other angle.”

He stressed that human trafficking operations are in fact a very serious and cruel crime that humiliates and denigrates the human soul by treating them as a commodity instead of a person. “This is a flagrant violation and exploitation of human rights — especially for women working in the domestic sector, he added, saying serious crime is perpetrated against the individual who loses his or her humanity and entity and freedom in deciding the place of work when they are exploited either for material gain or other purposes in cases where they are made to move to another place of work through coercion.”

Monitored
Al-Humaidi concluded that Kuwaiti Society for Human Rights have monitored a large number of cases of human trafficking on social networks and service sites, and “in response to this dilemma, we call upon the concerned authorities to act and arrest traffickers and hold them accountable without complacency, in recognition of the obligations of the State of Kuwait to promote human rights and the fight against trafficking in humans”.

Secretary General of the National Association for Family Security Dr Mariam Al-Shammari had a different opinion. She defined human trafficking as the recruitment, transportation, harboring or receiving of persons by means of threat, use of force or other forms of coercion such as abduction, fraud, abuse of power or exploitation of a situation of vulnerability.

She classified human trafficking into three main groups; trafficking for forced labor, sexual exploitation or trafficking in human organs. According to this definition, advertisements for the sale of domestic workers in Kuwait are not considered a real and practical type of trafficking in humans; rather, it’s a mistake in the use of the term (which was circulated unconsciously or unaware of the dimensions of its use or the abuse it represents).

For certain reasons, a family may wish to do away with the services of a domestic worker or driver, while the other party also wishes to remain in the State of Kuwait for work. National Association for Family Security rejects this type of advertisement because it imposes suspicion and envisages domestic worker as a commodity that can be sold or exchanged. She pointed out that “the State of Kuwait, its humanitarian leader, government institutions, and civil society organizations rejects everything that touches human dignity and fights human trafficking.”

“Yes, we have noticed the presence of advertisements for the sale of servants and resignation of servants on social media. It is a mistake using the term for transfer of services, because it is contrary to Kuwaiti and international labor laws,” statement said, noting “it affects the reputation of Kuwait, so we must prevent its spread and correct the misconceptions about the way domestic workers move from one house to another to prevent the use of the term housemaid to housekeeper.” It’s the duty of the government to prevent and criminalize advertisements that harm the State of Kuwait.

It is also necessary to conduct an extensive information campaign to introduce the rights of the parties to the contract, such as working hours, leave and end of service benefits. It should also include penalties in case of violation to guarantee the rights of both parties, while protecting the right of the employer to prevent him from falling into trouble in the wake of the ignorance of labor law, and to prevent exploitation of employers and domestic worker by some service offices

Human
Hadeel Bouqreis — proprietor of a school for human rights said what is happening in Kuwait, as regards the sale and purchase of domestic workers under the eyes and ears of government institutions and civil society organizations, is called trafficking in human beings in a situation where a person is sold from one family to another in a trend resembling the revival of slave trade era.

It amounts to deprivation of rights of domestic workers, which also contributes to promoting the concept of trafficking in humans. She added, “Certainly such practices will affect Kuwait’s global reputation in the field of rights, because when you translate the vocabulary of the advertisement it shows the reader that what is happening is a form of sale, and these words unfortunately are sometimes circulated as “I bought a worker”. All this makes us confirm the translation of those ads indicates “human trafficking operation”.

She continued “Kuwait is one of the countries that did not ratify the Migrant Workers Agreement, and there are companies trading in workers who pay huge sums to come to Kuwait. We have seen the UAE human rights committees addressing violations in employment contracts, while we have in Kuwait a number of problems unresolved so far. The new domestic labor law is not applied and there’s no monitoring mechanism to follow up these laws.