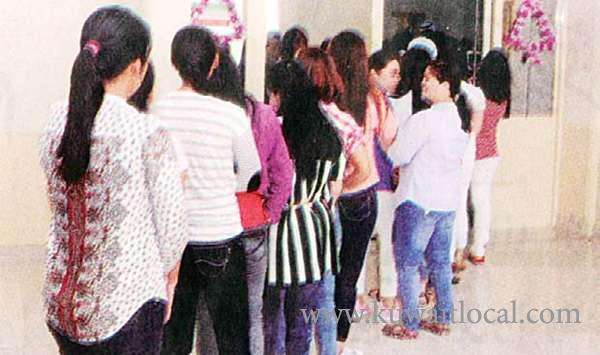 Recommendations In light of the subjects covered in this study, and the survey of the opinions of the parties concerned with law No. (68/2015), from employers (sponsors) to domestic workers, in addition to the recruitment offices’ owners and number of civil society organizations, the following recommendations can be drawn up: • Recommendations for the legislative authorities:

Work on the settlement of domestic labour issues by establishing a fast-track mechanism to resolve the labour issues of domestic workers.
Enable domestic workers to appeal against malicious absence from duty reports through judicial system, where absenteeism in the current legal framework suffers from legal deficiencies, in the absence of regulatory oversight. Employers resort to this act to get back at workers and deprive them of their remunerations, therefore using this as a bargaining chip, where they agree to cancel the absence from duty report filed against the domestic worker in return for a lesser settlement.
• Recommendations for civil society organizations:

Provide employees of civil society organizations with legal training courses that enable them to understand the provisions of law and its implementation mechanisms, so they acquire the experience and knowledge to deal with cases submitted to them and are able to find adequate solutions.
Expand efforts to raise the society’s awareness of domestic workers rights, and educate them on the ethics of dealing with domestic workers, respecting their dignity and the value of their work, by conducting awareness campaigns through media, social media sites, trainings and workshops.
Translate the Domestic Labour Law into all the languages spoken in the countries of domestic workers, and prepare guides that include the rights and obligations, as well as make publications on the rights and obligations available at the airport, in medical centers and recruitment offices.
Work on establishing partnerships with governmental authorities, and opening continuous lines of communications based on common rules, values and visions along with stated objectives, to report on law’s violations, address them through available legal means, and accomplish the principle of complementarity between the two parties, in order to achieve these efforts.
Grant civil society organizations greater space and powers to deal with workers subject to violations of their rights, through the transition from legal awareness to direct advocacy for domestic workers’ issues, and publish all achievements made regarding the protection of these rights and present them to different means of media to deliver direct message to those involved in legal violations that security authorities will be informed of their violations.
Form civil coalitions in order to amend some provisions of the law to be consistent with the rights stipulated therein, in particular those related to the elimination of all violations and deter them with legal provisions that include clear appropriate sanctions.
Train and provide domestic workers with qualifications and skills required to meet the requirements of employers, through training sessions and workshops.
• Recommendations for laboursending countries:

Ensure the training of domestic workers and provide them with qualifications by requiring local recruitment agencies to work on practical and professional training through approved training centers.
Providing awareness and education to domestic workers on the Law regarding Domestic Labour in Kuwait, and their contractual rights in accordance with the standard employment contract, as well as provide them with adequate information regarding the channels of support, legal assistance and contact information of embassy officials in Kuwait.
Print and distribute copies of the law regarding domestic Labour in the worker’s language so the workers can identify their rights and obligations stipulated by the law.
• Recommendations for United Nations Organizations (International Labour Organization – International Organization for Migration – High Commissioner For Human Rights)

Continue to provide the State of Kuwait and labour-sending countries with technical assistance, to the widest extent possible, by providing technical cooperation and advisory services.
Organize awareness campaigns to introduce domestic workers’ rights and implement projects and programs aiming at educating and legally supporting domestic workers in cooperation with competent governmental authorities and civil society organizations.
Cooperate with the Government of Kuwait to enable it to implement its obligations under the ILO’s conventions ratified by the State of Kuwait.
Urge the State of Kuwait to implement the accepted voluntary commitments under the universal periodic review mechanism (upr), in particular the accepted recommendations concerning the pursue of its efforts to guarantee the safety, security and dignity of migrant workers, including domestic workers, and the protection of their interests by taking the necessary institutional and legislative measures, as well as ensure their rights in accordance with international standards, prosecute those who commit violence against domestic workers, adopt specific standards for the complaints mechanisms, as well as ensure the law’s enforcement and incorporate penalties therein against those who violate the law.