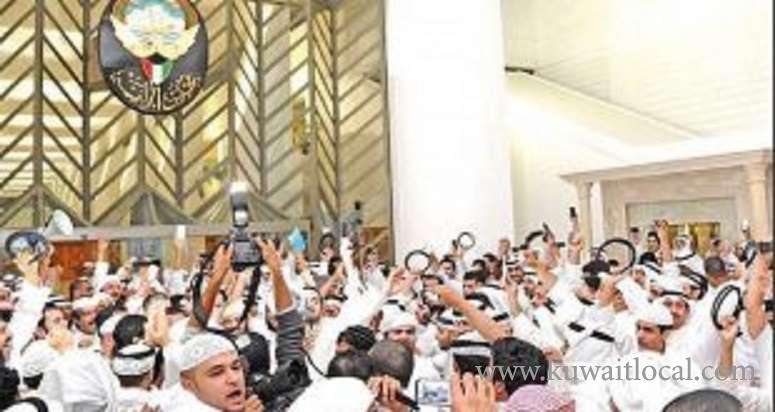 The local political scene is abuzz with talks after the Cassation Court announced Sunday its verdict on the National Assembly building storming case. Gearing towards protesting against the verdict, MP Mohammed Al-Muttair invited a number of his colleagues to a meeting at his diwaniya later this week in order to discuss the proposed parliamentary group resignation.

The group of MPs affirmed that the act of storming the Assembly building in 2011 was not a crime, but a reaction to “rampant corruption” and an initiative to implement reform. According to sources, the group will also look into the possibility of initiating a movement to issue a legislation to pardon all those sentenced to jail in accordance with Article 75 of the Constitution and raise the bar by submitting an interpellation request against HH the Prime Minister Sheikh Jaber Al-Mubarak Al-Hamad Al-Sabah if the government refuses to cooperate. Commenting on the verdict, MP Abdulwahaab Al- Babtain stated “the case has not ended, it has just begun.”

He added Article 75 stipulates that “the Amir may, through a decree, grant pardon or reduce punishment. Amnesty, however, may not be granted save by law and only in respect of offenses committed prior to the ratification of a law on granting amnesty.” Therefore, the MP said there will be numerous meetings and deliberations on this maneuver, which will require the full attention of those who believe that people who fight for reform should not be incarcerated.

MPs expected to attend the meeting are those who belong to the parliamentary party known as ‘Group 26’ — the same group that met shortly after the last parliamentary election to determine who to nominate as Parliament Speaker but their decision to nominate MPs Shuaib Al-Muwaizri and Abdullah Alroumi does not see the light as MP Marzouq Al- Ghanim achieved a landslide victory.

On the other hand, MP Waleed Al- Tabtabaei, one of the incumbent MPs sentenced to jail, pointed out that he would have understood if the verdict against him was due to storming the legislative building. However, since the verdict was for assaulting a police officer, he considers it unjust because he did not engage in such an act.

In another development, MP Mohammed Hayef has submitted a bill on safeguarding the integrity of the family; through which any family member accused of attempting to dismantle the structure of the family in words or action shall be punished by the law.

Article One of the bill stipulates that any member of a family — husband, wife, son or daughter — who behaves in a manner that disrupts public order and violates morals; which might result in severing family ties and undermining family integrity shall be imprisoned for a period not exceeding one year and fined not exceeding KD 1,000 or any of these penalties.

In his explanatory note, the MP said the Islamic Shari’ah stipulates preserving the family’s integrity and protecting it from any action which might lead to its collapse; because it is the foundation for a productive, healthy, law abiding and God-fearing society. He also cited a number of constitutional articles that support such a legislation including Article Nine which states: “The family is the foundation of a society; its pillars are religion, morals and love for country. The law shall preserve its entity, strengthen its bonds and protect mothers and infants.”