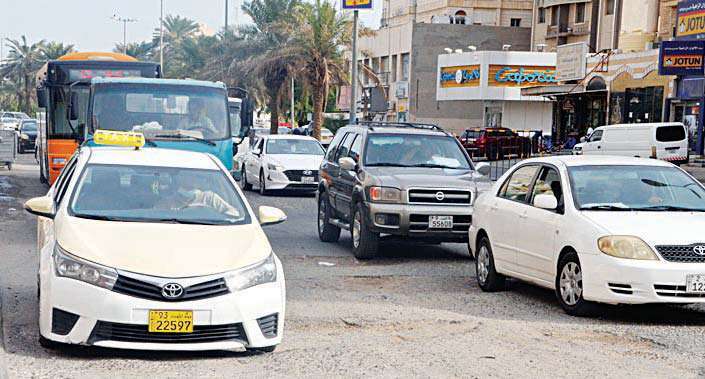 Whoever is led by his bad luck to visit Khaitan area to follow up something will assert that this area does not belong to Kuwait, even though this country is classified among the richest in the world. This is due to the level of deterioration of the main and inner roads in this area, despite the high degree of activity due to the presence of commercial complexes and investment buildings, as well as service buildings for providing services to citizens and residents, reports Al- Rai daily.

During a tour by the daily, several citizens and residents did not exaggerate when they described the state of the area’s streets as “bad”. They said, “When we watch the movement of cars on these streets, we feel as if the drivers of these vehicles are crossing a minefield due to the many deep potholes that fill the streets, specifically from the Khaitan entrance sign on the Airport Road, through the police station roundabout and the police station street, and until all the inner streets in the area.”

A number of residents of the area urged officials of the Ministry of Public Works to play their role in working on the maintenance of these roads, as they have not been maintained for more than ten years. They expressed surprise that these streets were left for several years without maintenance.

In this regard, Rashid Al-Duwaihi said, “We regret that the streets of Khaitan area, which is among the old areas of Kuwait and is inhabited by a large number of citizens and expatriates, are in such a bad situation. When I go through the police station roundabout from any direction, I feel as if I am going through a minefield due to the many deep potholes located in the streets of the area”. Al-Duwaihi asked the Ministry of Public Works officials to put the area among their priorities like other areas of Kuwait, and not to let it become the second Jleeb Al- Shuyoukh.

He said, “This area has large commercial complexes with international brands that are only interested in maintaining their streets.” Furthermore, Ayman Mustafa said, “Since the time I came to Kuwait in 2010, the area’s streets have remained the same. In fact, they have gotten worse because of the lack of maintenance. The traffic on the main and side streets of the area is very dense due to the huge population that resides in the area”.

In addition, Fahd Al-Otaibi said, “I wish the concerned authority would maintain at least the entrances to the area and its main streets. It could, in a later period, complete the maintenance of the side streets. Neglecting the main streets indicates to us that the area is far from the concerns of the Ministry of Public Works’ officials.”

Many of those whom the daily met said they hoped that the ministry would at least fill the deep pits that are prevalent on the main streets, until the signing of maintenance contracts, as it is inconceivable that the ministry is unable to fill the pits that cause major breakdowns for the cars of the motorists. Informed sources said the State Audit Bureau approved the maintenance of one of three practices that were previously put forward for the maintenance of the main streets in all six governorates, adding that it is expected that the ministry will this week obtain the approval of the bureau regarding the remaining two tenders.