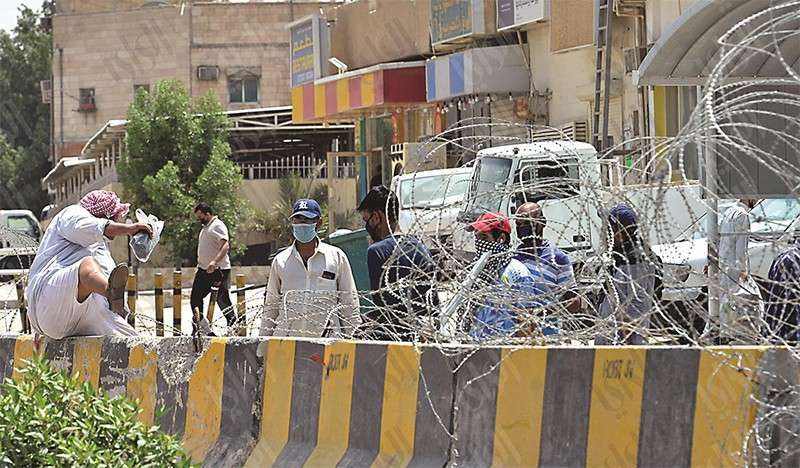 Despite the high temperatures in the country it did not prevent the security authorities from doing their role assigned to them by preventing entry and exit to the Jleeb Al-Shuyoukh area which is completely isolated as per the decision of the Council of Ministers and from tightening their security grip by controlling the entrances and exits of the area tightly and allowing only workers who are authorized to enter and exit, according to the official papers that are crosschecked on daily basis.

The scene and conditions in Jleeb Al-Shuyoukh has been under control of security men who deal with its residents with one rule whereby the residents of the region are allowed to receive some of their needs from their relatives through the security men only, but in some areas many crossed barbed wire from the gap between the cement barricades and the barbed wires.

In addition, it was noticeable that large numbers of workers associated with contracts with the Ministry of Health, Kuwait Municipality and others, who work directly in hospitals, are likely to enter and exit, where they are exposed to infection, as they enter the area and are allowed to move with official permits and books, with instructions Issued by the Council of Ministers, to allow this employment only.

Is there any guarantor of this resident that they do not transfer the virus from one region to another?
There have been number of volunteers affiliated with the Red Crescent Society and charitable committees, distributing food and other needs to the residents of the region, in cooperation with security men.